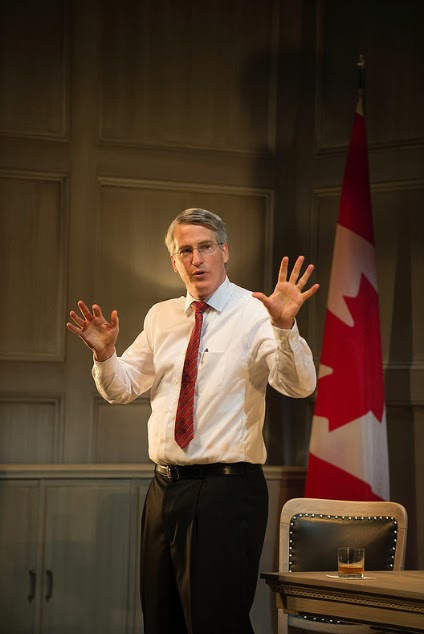 by Morgan McPherson
My name is Morgan, and I am a political neophyte. I’m rather sorry to admit that I’m one of those youths (although rapidly not becoming a youth anymore) that has only voted once, and seems to know very little about the candidates. Once I even got suckered into the “your vote doesn’t matter in this riding which is 95% X Party anyway” stream of thinking. For shame, right?  I’ll tell you a secret about why I’m uninterested in politics:  POLITICS ARE BORING.


If the real political world is anything like the world brought to stage in Michael Healey’s Proud, however, I might be convinced to change my tune. Proud (directed by Glynis Leyshon) takes place in an alternate (but similar) reality, just following the 2011 federal election. In this reality, the Conservatives won the election with a majority government, but a much larger majority than that which really happened. The play opens with the rather stuffy Prime Minister and his Chief of Staff examining a seating chart for the House of Commons when a fresh-faced new MP from Quebec, Jisbella Lyth, (Celine Stubel) bursts onto the scene with an unusual request. Rather than eliminate this loose cannon from his team, Harper decides to use her in order to distract people from other cuts that he has to make which the voters might find more 'objectionable.'  The play is full of irreverent humour, political jokes, and debate on the difference between tactics and strategy, beliefs and feelings. At the risk of revealing too much plot, suffice it to say that this play served to finally allow me to understand some things about how a government works, and what can drive a political mindset. Even a non-politico such as me was laughing wildly. Sure, a couple of potshots at specific political or news figures went over my head, but that didn’t matter one bit.

Rick Roberts portrayed a calculating, awkward, impassioned, hangdog (yes, all at once) version of the Prime Minister with great style. I haven’t seen that much energy on stage in recent memory, and it was a treat to be so entertained. From dignified leader of the country to awkward seducer to impassioned soliloquist, his performance covered the entire gamut of emotions. He was equally matched in energy and performance quality by Celine Stubel, portraying new MP Jisbella Lyth, a fiery single mother whose feelings dominate her decision-making, and of course by his Chief of Staff and acolyte Cary (Charlie Gallant). Kieran Wilson portrays Jisbella’s son Jake in several flash-forward scenes to the year 2029, when Harper is still Prime Minister and Jake himself is running as an independent candidate.

I have never been part of such an appreciative audience; one that was quite literally roaring with laughter for 90 minutes straight. Being part of a large group of people experiencing so much joy was refreshing as all get out, and if you get a chance to see Proud, even if you’re not politically inclined, I think you’ll love it. Good work, Mr. Healey! I will be telling all of my friends.


Run Time: 90 minutes, no intermission
Posted by THE CHARLEBOIS POST at 4:56 PM