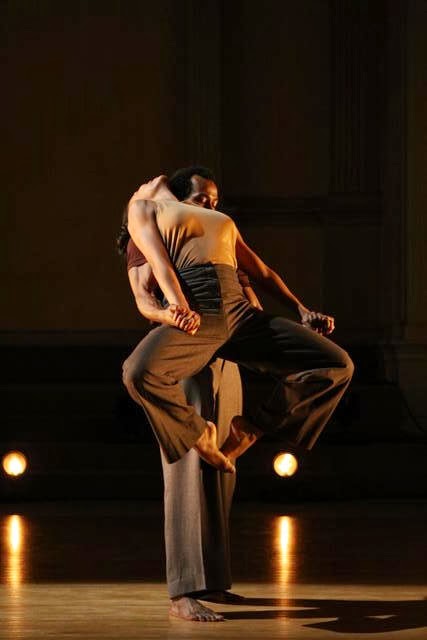 New York based dance company Abraham.In.Motion opens the World Stage season with Kyla Abraham’s personal piece, The Radio Show. The piece is an homage to the music Abraham and his family listened to on the only two urban radio stations in his hometown. In the same year the radio stations stopped broadcasting, Abraham’s father also developed Alzheimer’s and aphasia. Abraham has created a dance that connects these two losses, the silence that follows, and how relationships are affected.

The Radio Show is a celebration of music through movement. The sound design is superb. No sound designer is credited but there is mention of additional editing by Herman Soy Sos Pearl. We hear the switching and tuning of radio stations with bits of pieces of familiar songs mixed in with jarring pink noise. There are intermittent songs, beats, radio noise, and recordings of phone calls and broadcasts. The bouts of radio static are reminiscent of what I imagine a bout of memory loss to be like. At one moment a dancer is moving to a joyful Motown tune and when the song stops, he is at a loss, for movement and words. We see his mind coming in and out of confusion and familiarity while teetering on the edge, of a large circle of light on the floor.

The beautiful concept of this production reminds one that music is a way to bring you back home. When more dancers appear on stage we see how human relationships can crumble or come together when one is 'at home' with their music. The seven dancers are all equally mesmerizing in their movement. Some choreographic highlights include lyrical movement to hip-hop music and an all too short impressive moment of krumping.

Lighting Designer Dan Scully’s choice of the upstage floor lights facing the audience is an interesting and awesome look, especially for high-energy sections that nearly blind the audience.

The show also begs the question - how does modern society interact with the radio today? And what do those on the radio have to say? What we can't express in words, we have music and dance for.