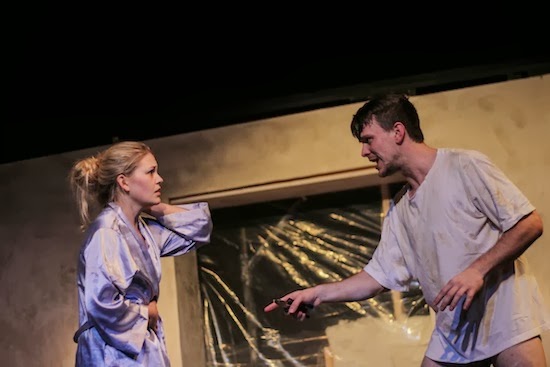 Genevieve Fleming, Jay Clift (photo by Matt Reznek)
The need for connection “I need you”
The fear of conspiracy ‘They want me”
by David C. Jones
@iamdavidcjones

Bug was the second play written by eventual Pulitzer Prize winner (for August Osage County) Mr. Tracy Letts. It is an intriguing story of some of life’s losers finding hope and the destructive nature of delusion. Hardline Productions is a sexy young company that love psychologically complex stories and have a keen ear for sound and an eye for movement. The story called Bug would seem to be a good fit.

Agnes is a drug addict who drinks but is able to stay straight enough to work part time as a waitress. She lives in a hotel and when we meet her she is chilling in a doorway enjoying some red wine. Her bleary eye bliss is interrupted by a phone call without anyone on the line. She believes it might be her ex-husband recently released from prison.


Later that night her lesbian friend RC introduces her to a young man and although Peter seems awkward and shy, Agnes allows him to crash on her floor. The tenderness of these cocaine-using, vodka swilling young people makes you hope things will blossom between them. There is a sort of red herring introduced with Goss, Agnes’s ex who breaks his restraining order and shows up at the hotel. He is there to highlight her violent past, but the story is really about what happens to Peter after he and Agnes consummate their relationship.

The reason Peter is so quiet and shy is that he is all kinds of crazy. I am not giving anything away here really. You get that from the set up. Early on we are pretty sure things are not going to end with rainbows and puppies. There is an air of drama for the sake of drama, so the task is up to the actors to lift the story and make it compelling. Thankfully they are up to the task.

Genevieve Fleming (Agnes) is an actress of incredible depth and with ease she can bring truthful tears or raging anger. Jay Clift (Peter) finds the soft and awkward with that undercurrent of crazy desperation. Late in the play, as she is cradling him after a panic attack, their need for each other is palpable and tragic. Melissa Oei plays RC and opts for the lipstick lesbian approach with great strength and razor sharp emotional turns as things twist from party mode to potential violence. Bob Fraser plays Goss and shows off his hard body, which fits his character's two-year prison stint. He also blends an intriguing combination of violence and tenderness bringing some welcome complexity.

As our desperate lovers descend into delusion and trade conspiracy theories about government implanted bugs, a mysterious Dr. Sweet shows up played with an almost Machiavellian charm by Raphael Kepinski.

The sound by Matthew MacDonald-Bain is boldly intrusive and evocative. The set by Jenn Stewart captures a modest hotel room with panache considering the tight budget. Effective lighting by Raes Calvert and costumes by Christopher David Gauthier round on the production the newly renovated Renegade Studios.

It is a testament to director Sean Harris Oliver that the actors bring such depth and raw emotion. A script that deals with the delusions of crazy people is super challenging - we need to empathize or care what is happening to them and the actors with the help of their director bring their best to make it compelling.

The story plays out in a rather obvious tragic way so although you are never really surprised you are never bored either. The great joy from the production comes from seeing actors we have seen before surprise us with their powerful work.