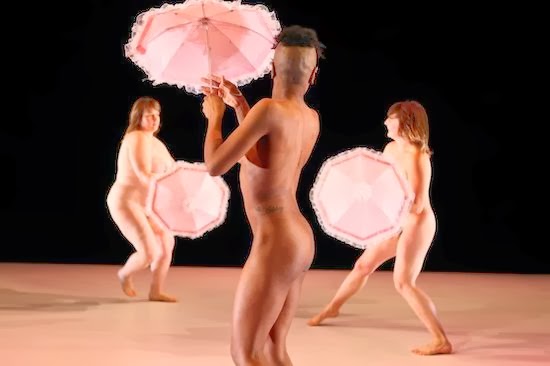 Harbourfront’s World Stage brings us Untitled Feminist Show (UFS), written by New York playwright Young Jean Lee, with choreographer Faye Driscoll, and director Morgan Gould. This is the second display of Lee’s work in Canada after World Stage’s 2013 season included The Shipment, her commentary on the black experience in the United States. UFS similarly grapples with identity politics, but this time, as all promotional material is quick to tell you, the action unfolds without words or wardrobe. What you can expect then, is less of Lee’s signature caustic commentary; instead, the more playful element of her previous plays seems to have exploded into 60 minutes of exuberant whimsy.

The play begins abruptly as the mood lighting dissipates, and stark spotlights illuminate the audience. Emphatic, diaphragm-supported breathing can be heard from behind as four naked performers descend from the back of the theatre, exhaling in tandem as they proceed solemnly to the front.

The stage is bare with a white rectangular structure suspended above, which will later showcase forgettable projections. From the wings, two more nude performers join the procession to form an arresting tableau, intimidating the audience with their seeming unity of purpose. The ceremonial feel quickly collapses as light classical music comes on and the performers act out make-believe scenarios that parody feminine caricatures. Most delightful, is a hip-hop routine comprised of domestic duties, culminating in a group sculpture vacuum cleaner. Between skits, the performers evolve into choreographed movement. Ballet and modern dance blend to create somewhat bland sequences—in lieu of inventiveness, the actors’ unfettered joy is ultimately what animates the performance. So, while those expecting avant-garde modern dance may be disappointed, the awkward leaps that only gesture towards pirouettes are far more compelling than those with cultivated technique. One exception would be a tender pas de deux between two dancer-performers that involved lots of intricate floor-rolling and spooning.

About half of the original cast has been replaced for this iteration, which might explain why some of the performers seem less suited to their roles. Amelia Zirin-Brown, aka Lady Rizo, gives the most dynamic performance, first as a maniacal enchantress and then in a hilarious pornographic pantomime. But this is truly an ensemble endeavour. As the women act out utopian visions of gender fluidity, I felt my own pangs of idealism. Such unbridled optimism is what makes this one of the most brave and daring pieces you’re likely to see on a Toronto stage this year.