Review: (Vancouver / Theatre) For the Pleasure of Seeing Her Again 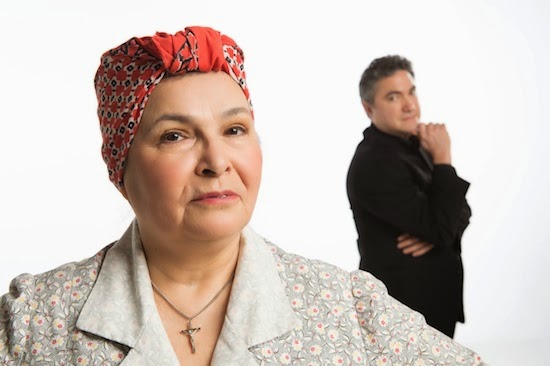 The matinée performance of For The Pleasure of Seeing Her Again had school groups in with a fair number of First Nation students in attendance. Written in 1998 as a tribute to his late mother Michel Tremblay has crafted a nostalgic, funny and theatrical remembrance.

Full Circle Theatre adapts the two characters from Catholic French Canadians to a First Nations mother and son. Since Tremblay has a line referencing his Cree grandmother already there, the only clear change is a magical bit of stagecraft that has an aboriginal flair.


The play is a writer remembering his high-strung mother from his youth until her death. She irons clothes while she cajoles and berates her son in often very funny rants. He cowers scared and as he ages he becomes more bemused and sometimes frustrated with her tirades.
Kevin Loring plays the son and he is charming and fun, mugging and mocking his mother to the delight of the audience. Margo Kane plays the mother and she is joyfully blustery and wickedly bombastic. She strikes equal parts terror and giggles in her stories of warning.
The play has no plot and while it manages to avoid sentimentality the challenge is to make the mother’s rants and the son’s remembrances have stakes and ‘wants’ to keep them active and engaging.  On this matinée performance the actors sometimes lost the drive allowing the mind to drift but the audience remained appreciative. They are dynamic actors and maintained a solid relationship, sense of history and compassion.
The sheer enthusiasm of the crowd was palpable, especially from the First Nation students. I wonder if they were also responding to seeing themselves represented on stage in a non-issue play. Often aboriginal playwrights write plays with a message. Here a French Canadian play about family was simply re-cast. I imagine that must be refreshing.
Feb. 20 - 28
Posted by THE CHARLEBOIS POST at 5:47 PM

Email ThisBlogThis!Share to TwitterShare to FacebookShare to Pinterest
Labels: David C. Jones, for the pleasure of seeing her again, full circle theatre, The Cultch, theatre, vancouver