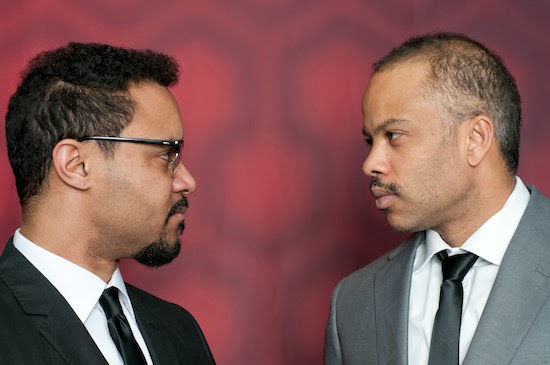 About MLK and Malcolm…
by Aleksandra Koplik


What if Martin Luther King Jr and Malcolm X sat down and had a conversation? What would be the outcome or consensus? Written by Jeff Stetson and directed by Quincy Armorer, Black Theatre Workshop presents The Meeting. It’s a play that addresses such timeless issues as racism, poverty and discrimination.
Fade in. The audience sees a sleeping Malcolm X (Lindsay Owen Pierre), he is awoken by his bodyguard Rashad (Kareem Tristan Alleyne). X’s house has just been bombed and his thirst for change has never been greater. He awakes from a nightmare and almost immediately greets Martin Luther King Jr. (Christian Paul).  We are introduced to two completely different standpoints on racism. The two are different in almost every way possible:
King is Christian. He was a Baptist reverend.
X is Muslim (who knew!?).  He converted from the Nation of Islam to Sunni Islam and became a minister.
King wants to make change through love. He believes there is no hate with love.
X pushes for change through force. He is certain that people don’t understand love, they understand action.


But they do have one main thing in common, they both want to eradicate racial injustice. This play shows that no matter the differences, it would be possible to find common ground, even if it’s between people who are fighting towards the same goals but through different means.
Though very minimalistic, this production has a simple, yet compelling script. It’s informative, for those who didn’t pay attention in history and it really shines some light on two of the most important people in the 20th century. It has a very cinematic feel to it, in terms of lighting, set and costume, incredibly easy to follow and since it’s mostly dialogue, most importantly it’s interesting.  There’s a certain lightness to the play in the language, it’s serious – but comedic. I would definitely recommend this for families, teenagers or those who are interested in historical pieces.
Feb. 22 - Mar. 1