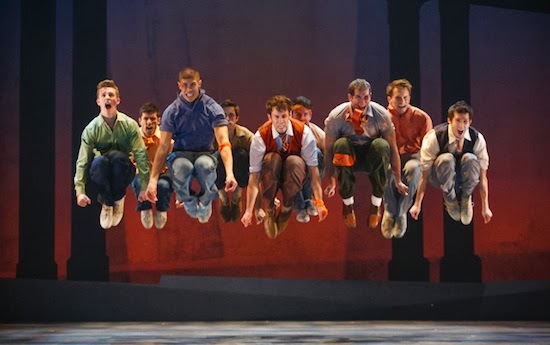 High Octane
by David C. Jones
It’s big and energetic.
That is part of the problem.
A powerful classic is considered such because it moves generation after generation. West Side Story, premiered in 1957, and its blend of dance and social commentary captured the audience. Themes of first love/young hormones and the generation gap make the play resonate even though some of the language like “Daddy-O” has long left our vernacular. Audiences connect to the struggle of young people trying to make their way into adulthood against great odds.
Broadway across Canada is presenting the Troika Entertainment production of West Side Story based on the recent Broadway revival. The story is of two rival gangs one Puerto Rican (The Sharks) and the other of Irish/Polish descent (The Jets). Things get heated when the younger sister of the leader of the Sharks (Maria) falls in love with the former leader of The Jets (Tony).

Like the recent Broadway revival the producers have changed some of the songs sung by the Sharks to Spanish. The cast is mostly recent graduates of musical theatre schools and they can sing and dance with great skill. The cast looks great although modern workout techniques mean the 1957-gang members look like they are models from Abercrombie and Fitch.
All the classic songs are here: Tonight, America, I Feel Pretty (although she is no longer “Pretty and Witty and Gay” instead it is the less giggle inducing “Pretty and Witty and Bright”).
There are some stunning vocals: Jarrad Biron Green as Tony and MaryJoanna Grisso as Maria create exquisite harmonies and soaring solos. The biggest surprise is Rosalie Graziano as Anybodys in Somewhere, she provokes goose pimples.

The recreation of the Jerome Robbins dances by Joel McKneely is as energetic but less dangerous. This is part of the problem with this presentation.

The show looks fantastic but the cast of 33 fail to completely pull us into the story. Director David Saint has all the characters ramped up and firing on all cylinders. They are all surface and no nuance.

I have seen productions where when Lt. Schrank berates the kids you feel their pain at the betrayal of trust from this authority figure. Here Skip Pipo is practically twirling a moustache he is so mean.
Anita is a brilliant written character with a fascinating arc when she sides with Maria over her grief of her slain lover, but Michelle Alves is also encouraged to go so big and fiery we don’t feel her conflict.
When all the Sharks are together they don’t have distinct personalities, they are all equally hyper, explosive and posturing so we are never sure who is who until they are named.
The young lovers meet but we don’t get the mixed feelings of lust and fear, it’s just pawing and staring.
When the Romeo and Juliet story reaches its tragic conclusion, instead of being devastated by the sudden joy that is wickedly cut short we watch passively, startled only by the sound of the gunshot not by what then transpires.
I admired the production values and the energy of the cast but I wanted more. I have seen four productions of West Side Story and have been moved to tears by three of them. Not this one. It’s very good, not great.