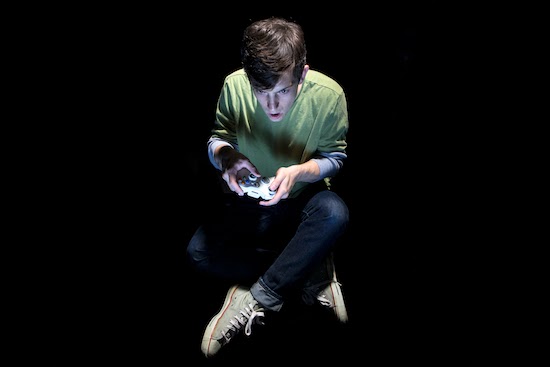 (photo by Cylla von Tiedemann)
n00b: not for newbies
When identities become merged
by Jason Booker
Sitting in my seat, waiting for the show to begin. Yes, the sound of the school-children becomes a little overwhelming. Especially when you hear the pre-show music underneath stop. Abruptly. Why did it do that? Because the loop of about a minute of sound ends on a loud note and begins on another loud note a few seconds late. It makes the underscoring here very obvious, instead of the subtlety that is typically the goal of sound design that leads the audience into the world of the show.
Why start a review with this nit-picky detail? Because it represented much of the work put into n00b: it goes for flashy effects or dramatic moments but it crafts them together so ineptly that it hardly makes sense and usually draws attention to itself. n00b is a touring one-man show written and performed by Christopher Duthie intended for young audiences.


Fifteen-year-old Daniel plays sports and is rewarded for a great goal with a video game he has been pining after for a while. Daniel becomes addicted to it, cutting off real-life friends and hiding in his room to interact with these violent fictional characters. His world shifts when he visits his idol/leader from the game, SUNTZU, who isn’t the wise warrior he portrays himself as online.
Duthie is an energetic and charming young man; his performance as young Daniel is completely believable and pedantically engaging. His other roles are hard to describe. This is one of the first times I have seen a one-man show where the characters all look and sound and move the same way, whether they are housebound nerds, middle-aged fathers, soldiers in a video game or average teenagers. If only director Nathan Pronyshyn had been able to push Duthie to create sharper versions of each character or to have cast a stronger actor in this one-man show, n00b might work. But then there’s the script.
The story becomes difficult to follow because Duthie the writer has chopped up the linear nature of these people to make it more literary and dramatic. But without strong distinctions between the characters performed on a too-small set, the story becomes jumbled, even in a 45-minute form.  Maybe neither of the roles of performer and writer became clear or distinguishable for Duthie, odd in a play all about how people define their identities too.
The show opens with Duthie lying face-down on a raised portion of the Minecraft-inspired set, amid a flash of strobe-light and the continuing pre-show music loop. There are no words and no actions. Unfortunately, a moment like that does not grab the audience’s attention (there was lots of fidgeting and whispering throughout the show I saw) especially when it isn’t clearly explained for another fifteen minutes. It just never feels like the show is really intended for the kids: the term n00b is used but never explained (the recommended audience is under 12… they might need a few terms clarified) and the piece is flashy theatrics and not wowing spectacle or moving storytelling.
Worst of all, the highlight of the show was Kaely Dekker’s video and projection design. Why worst? Because it made me want to go home and submerge myself in the world of gaming, especially if I could leave n00b behind earlier.
Feb. 11 - 20
Posted by THE CHARLEBOIS POST at 4:33 PM