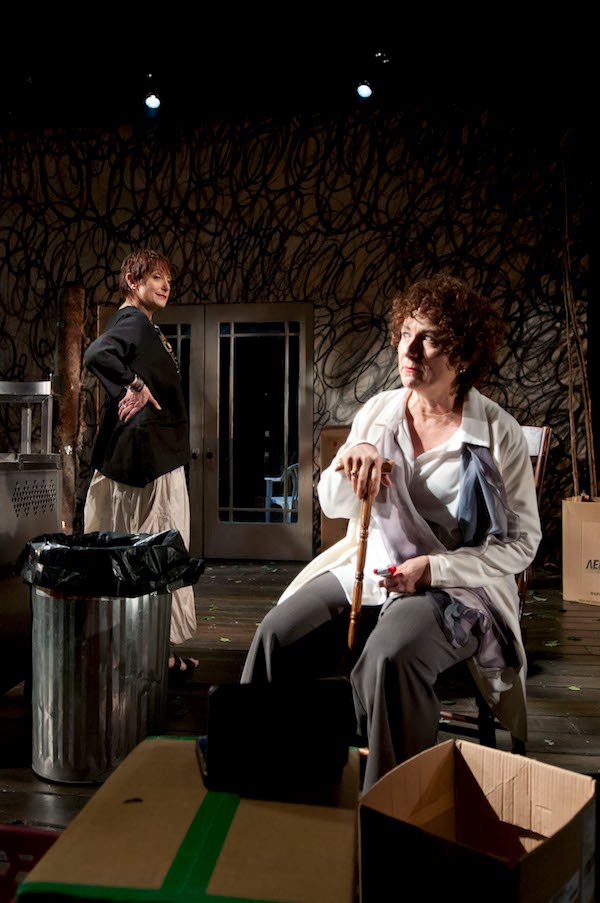 In the program for The Segal Centre's production of The Seagull, adapter and director Peter Hinton's name precedes and looms large over playwright Anton Chekhov's. A bold statement reflecting a bold stamp: transplanting the play to a contemporary Canadian context, cross-gendering characters, and playing fast and loose with Chekhov's text. All of which could have gone very very wrong. And didn't. The Segal Centre's first full-length production of a Chekhov play is rich, quirky, vibrant, and deeply satisfying.

As the evening began, I feared that the winks to Canadian culture – name dropping the likes of Jian Ghomeshi and Christopher Plummer – would quickly wear thin. But soon enough the self-referencing settled down, and Hinton's modern bent felt much more natural and fruitful.


The Seagull resists a quick summary – Chekhov was always most interested in the intersections among many lives – but it centres around the volatile relationship between a well-known actress, Arkadina, and her depressive son, Constantin, a writer obsessed with forging new forms of expression. The many other characters – relatives, neighbours and love interests – circle around these two with various cause and desire. In Chekhov's world, people are destined to either never get what they want, or (worse) get it and realize it's not what they had in mind.

The story world is beautifully served by Eo Sharp's eclectic and irreverent stage design. The moon is a grey exercise ball, swinging like a wrecking ball, and Constantin's stage is a tangled mess of white plastic chairs. The walls are covered in circles and swirls, going on forever like the doodlings of one of the play's bored souls, and the trees live as easily indoors as out. In the final scene, a Warhol-hued portrait of Chekhov himself hangs over the proceedings, as though silently encouraging this playful adaptation. The set transforms several times throughout the evening, each transition executed – through striking song selection, clever lighting and inspired stage-craft – with vitality and magic.

In a stand-out performance, Andrew Shaver plays the well-intentioned, but defeated, Medevenko,
a love-sick school teacher, whose humour and fashion choices are always a few awkward steps behind.

A sad mix of hope and resignation is palpable in Shaver's touching portrayal, and his comedic sense is in high gear (a percussive moment with a croquet mallet was especially inspired). Patrick McManus cozily inhabits the role of town doctor Dorn, with an affable, breezy charm, even offering up some musical stylings on the guitar.

Patrick Costello had a harder time in the role of pained young writer, Constantin. The tortured artist having become a very tortured trope itself, the role is certainly the play's trickiest. Hinton and Costello, perpetually slack-jawed and sulky in the role, could have found a little more shading to complicate the character's obvious one-note nature. Finding greater contemporary resonance for Constantin to fit this adapted setting (copy of David Foster Wallace's Infinite Jest notwithstanding) may have also helped audiences rally greater sympathy.

Most actors had a few perceptible moments of bristling against the sometimes declarative dialogue.  For all the celebration of Chekhov's sub-text, his dialogue is very often right on the nose, and hits that nose over and over again. Two-hander scenes, the most overtly earnest and emotional, were the evening's least successful. Often pitched too high, they wore on too long, sometimes featuring hysterical outbursts that were a challenge for the audience to situate tonally.

But. A play like The Seagull lives or dies by the ensemble work, and this is where it soars. What's fascinating about watching artists work together as a collective is that what they actually create is a sense of setting. Watching The Seagull, I had a most distinct and pleasurable feeling of 'being there'. The company effortlessly creates that sort of dense, all-encompassing atmosphere you get from a Robert Altman film. The production's highest achievement is thus that it felt not like an event but a place. A place you wanted to be. And to stay. In our digital age where physical presence seems less and less relevant, and we're starting to wonder why we bother getting together anymore, this is no small feat.

The play is long. There's no way around it. I didn't get home until midnight. But I felt invigorated. And as I walked home through the gently falling snow, along the quiet-by-night street, I noticed a couple embracing on the corner, a man clearly comforting a woman, her sobs audible as I passed.

It got me thinking about the alchemy of things, the way various elements, unremarkable in isolation, can galvanize into something so powerful. It's collaboration, it's gestalt.  It's a real treat to be invited in from the cold.