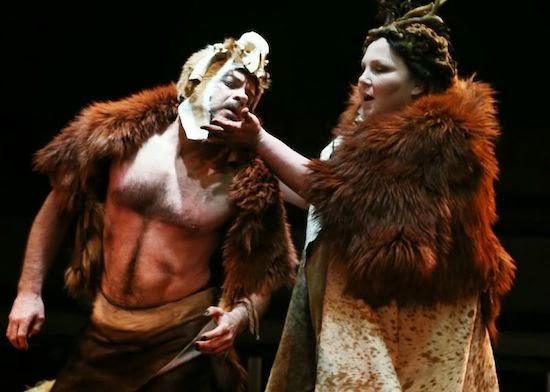 When entering Espace Libre’s black box theatre, the overwhelming sounds of snarling and heavy breathing echo in the room – a definite warning of what is about to happen on stage. The audience sits on benches around a square platform filled with dirt, the centre of the action. When the lights go out and turn back on, four people dressed in animal skins jump onto the stage from the four corners of the room: two women and two men present throughout the whole play (Pascal Contamine, Kathleen Fortin, Marie Lefebvre, Gaétan Nadeau). They are accompanied by a live narrator (Charles Préfontaine).


The directors of  Amours Fatales, Jean Asselin, Sylvie Moreau and Réal Bossé, divide the play and each take on three of Jean Racine’s works: Andromaque, Bajazet and Bérénice. Andromaque is portrayed in the prehistoric period, Bajazet is set in Constantinople and Bérénice is set in contemporary Rome.The actors were dressed first in animal skins, then the traditional Byzantine gowns and finally in suits and futuristic black leather, courtesy of Judy Jonker.

Although the costumes are very impressive, the acting is not. Somehow, I didn’t buy into the passion or love that was portrayed on stage. For one thing, Fortin would not stop crying hysterically in all three acts. It was anguish taken to a whole other level. Also, the language of Racine is very complex and sophisticated and in these settings it just did not work with many aspects of the production. As previously mentioned, the costumes were very intricate, but they were not in tone with the physical and verbal language presented on stage. It was very hard to follow and very easy to doze off. At one point 17 people were counted sleeping at the same time. Another moment worth noticing was the slight wardrobe malfunction with the skirts of the animal skins on the actors – some major flashing went on when they were jumping or crawling on stage during the first act.

As someone that admires and respects the work of Racine, I found it very difficult to follow Omnibus’s adaptation of the three plays. Of course, combining such classics is a challenge in itself and though the attempt was there, it left a void in the performance because of its basic minimalism.