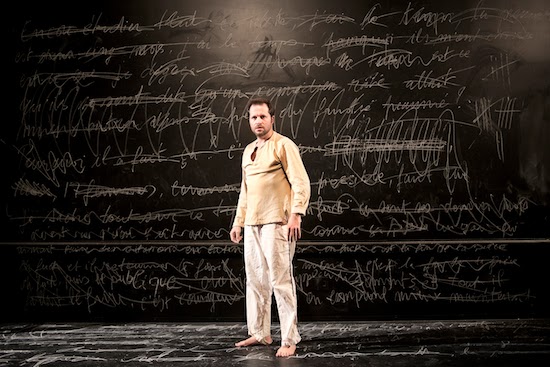 When is a role not a role?
by Élaine Charlebois

In Le dernier rôle, writer, performer, director Mohsen El Gharbi plays an actor preparing for a role that will make or break his career; a role that no one else is willing to undertake. He is asked to play a mass murderer named Mark Taylor who was responsible for killing 17 female students from Anchorage Institute of Technology in Alaska.

Drawing on the tragic shooting of 14 women that occurred at l’École polytechnique here in Montreal on December 6, 1989, El Gharbi explores the grim process that takes place in transforming an everyday man into a cruel assassin. Having subjected himself to 18 months of brutal research on the subject of serial murder, the actor successfully brings out the feelings of torment and fear that his character must experience in order to become murderer Mark Taylor.

The intensive work and dedication that El Gharbi put into creating this piece is made known throughout the piece. During his entire monologue, I truly believed that the actor was in fact undergoing a transition from sanity to insanity. He managed to encapsulate the torment and fear that his character must go through in order to bring himself closer to the mass murderer he must portray. The consuming and overwhelming preparation that it must have taken in order to create Le dernier rôle is definitely reflected in the actor’s performance and certainly helped inform the anxiety and distress of his character. El Gharbi displayed such vulnerability and complete surrender to the task at hand, that it results in a disturbing yet mesmerizing performance.