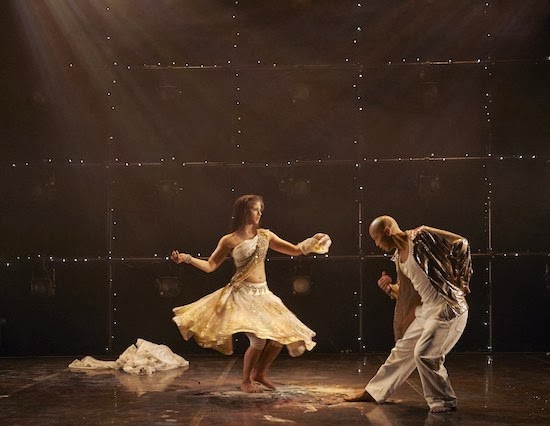 Timing In All
by Winna Tse
@tsewinna

Written and choreographed by Anita Majumdar and co-produced by Theatre Passe Muraille, Alberta Theatre Projects in association with Nightswimming, Same Same But Different (SSBD) proves to be an extraordinary piece of work. SSBD is a poignant story on cultural prejudices and two women entangled within it. In Act one, Canadian-born starlet, Aisha, (Anita Majumbar) returns to Canada to shoot her latest film and meets Ben (Nicco Lorenzo Garcia), a Filipino Canadian background dancer. Their interaction forces Aisha to further delve into her prejudices about nationality, skin colour and family. Act two is set 20 years prior and tells the story of Aisha’s mother, Kabira, also played by Majumbar and her life-changing encounter with Bollywood.


In Act one, Majumbar and her co-star Nicco Lorenzo Garcia mesmerize the audience with their high energy, engaging choreography and amusing banter. Act one beautifully captures the essence of Bollywood cinema through flashy and intricate stage production, music and dancing. Another prominent figure in the play was the sound engineer voiced by the hilarious and boisterous Reza Jacobs. The comedic timing between all three actors was bang on and kept the audience laughing at the right moments. I must say, Majumbar was indeed the highlight of the play for me.

As a dancer, she is fierce, intense, and graceful all once. As an actor, she has the rare ability to effortlessly flow through different emotions without missing a beat and still keep the audience in tune and engaged. She is truly deserving of all the accolades she has received for her immense talent. Act one was indeed my favourite portion of the play but Act two didn’t fall too far behind. Act two displayed the superb chemistry between the actors but it may have dragged on a little too long. Despite this, both actors showed excellent comedic timing and the skill to keep to a story moving forward.

Overall, SSBD is well-told and deserving of the standing ovation it received from its audience members. Despite my lack of knowledge in Bollywood cinema and the countless cultural references displayed throughout the play, I was still very much touched. SSBD is entertaining, moving and thought-provoking as it forces the audience to re-examine their own cultural prejudices and assumptions because believe it or not, we all have them.