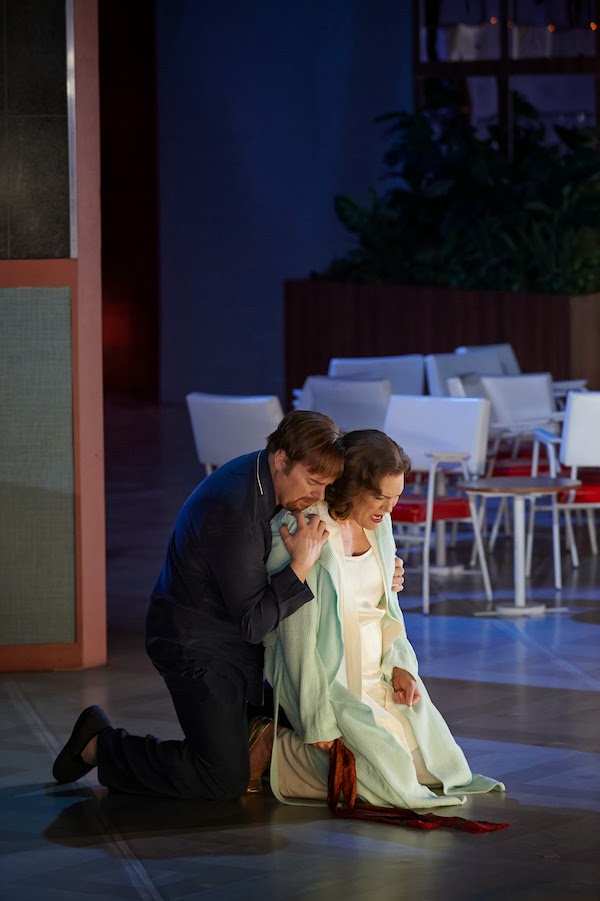 What the Booing Meant
by Lucy Wells

I’ve just come from the opera and, to be honest, I’m not sure what to tell you about it. The Canadian Opera Company has just started its run of Verdi’s Un ballo in maschera. One of the more frequently performed works in the operatic literature, it is a showcase of beautiful music. In the hands of the COC, it features some of the finest singing and playing I’ve had the pleasure of hearing.

The cast stars American tenor Dimitri Pittas as Riccardo, Canadian soprano and COC favourite Adrianne Pieczonka as Amelia, English baritone Roland Wood as Renato, Canadian soprano and COC Ensemble Studio graduate Simone Osborne as Oscar, and Russian mezzo Elena Manistina as Ulrica. These five, as well as the other artists rounding out the cast and the chorus, sing about as well as you could ever hope for. Pittas and Pieczonka, both debuting in their roles, sing as though the music was written for them. They all do, actually; it’s difficult to single out any one artist when everyone performs so beautifully. Stephen Lord, the conductor, brings a luscious sound out of the orchestra, and paces the work naturally. Even when there were slight ensemble issues (the fun of live theatre!), the cast and orchestra came back together almost immediately; clearly, everyone is at the top of his or her game. The performance was a master class on how to perform this repertoire. On those merits alone, it is a show worth seeing.


I was not impressed, however, with the staging.  The show has been transposed to an anachronistic 1950s setting, and I can’t understand why. The directors and designers have decided to let the entire action unfold in a hotel ballroom, a hulking, cluttered mass of vaguely threatening aqua and red (I never thought I’d type those words). There is furniture everywhere, and a stage, and a bar, and an upper level, and glittery lamps, and two light-up, mirrored pillars taking up space right in the centre. It is effective in the final scene, during the masked ball; it is less convincing but still serviceable as the governor’s palace in the first scene; it doesn’t make a lot of sense as Ulrica’s dwelling, or Renato’s house, or the gallows at midnight (they added two hanging bodies to set the scene in the latter; was one supposed to be Ulrica? But I thought she was pardoned? And was that her again at the end? Do I just need new glasses? I’m confused). Riccardo now has a silent wife in a pillbox hat. The trouser role, Oscar, has been changed from a pageboy to a female performance artist. The costumes in act 2 consist entirely of pyjamas, including short shorts.  In short, I didn’t understand what all these changes were supposed to prove, though the cast gamely did its best to sell the production.

It’s one thing to update a work like Ballo, if the changes that result illuminate new facets of the work. From the notes in the programme, I understand that the audience was supposed to understand the opera’s new setting as a comment on racial inequality. I didn’t see that on stage, however: I read it as a vanity project that got in the way of the opera and the performers. I found myself tuning out the set to be able to understand the action, especially in act 2, when Pieczonka did her best to mime hunting for plants amid a clutter of vinyl chairs. There are times when a production’s overriding conceit may out-rank the cast, but I don’t see why this was the case here. Ballo is a work of great beauty, and wrenching emotion, and the best and worst of what it means to be human; instead of giving that to the audience, the production team cluttered it up with meaningless distractions and a veneer of mid-century pastels.

In short, I have very mixed feelings about this production. The musicians in this production, soloists, chorus, orchestra, and conductor, were all superb, and I wasn’t surprised when the audience gave them a standing ovation. Neither was I surprised, though, when the directors and designers were booed.