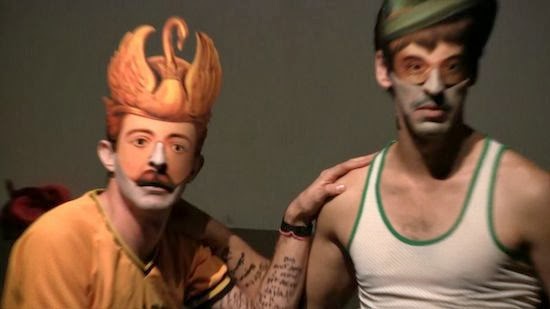 (photo by Lily Jamali)
A Loud Mosaic
by Jim Murchison

The concept behind A Quiet Sip of Coffee is intriguing right from the get go.Theatre graduates and best friends, Anthony and Nathan, one Gay and one straight write a prank letter to a fundamentalist organization dedicated to reformation of Gay men. They are looking for funding of their play Never Cry Wolfman, a play that examines the monster within. Surprisingly, they get a favourable response provided that they agree to go through some Gay reversal therapy. The problem is they never actually wrote a play but they need the funding, so they accept.


Creators\ performers Anthony Johnston and Nathan Schwartz have assumed the names David and Jack for this adventure which doesn't probe as much into fundamentalism as it does the relationship between the two friends and how the conversion therapy almost destroyed the friendship. It goes from hilarious to dramatic and back again as if the audience was a restless TV viewer with a shaky surfing finger.Jumping back and forth keeps us engaged and off balance at the same time. And don't let the title fool you, it gets very loud before it gets quiet.

The two actors play a number of roles but in most of the relationships that are examined, one actor is playing both of the characters. That is  except when it is about the two friends themselves. Nature verses nurture is also looked at without dismissing either argument entirely.

The subtitle, This Is Not The Play We've Written is very telling.There are times when the play seems improvisational and times when it seems crafted, but it is always entertaining. It seems like it may evolve into something different; perhaps into This Is The Play We've Written. Of course that is entirely up to Johnston and Schwartz. In the meantime you can see A Quiet Cup of Coffee. I'm not sure if it will answer any questions for you but it asks the right ones and it's great fun.

Runtime: approximately 80 minutes with no intermission.
Posted by THE CHARLEBOIS POST at 5:41 PM