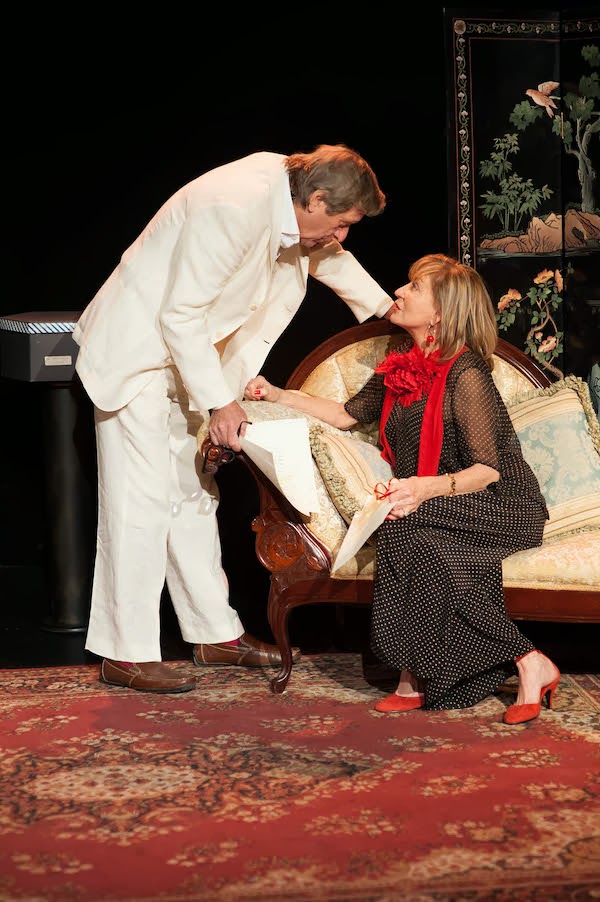 Missed Connections
Blocked in translation from the page to the stage.
by Lisa McKeown
@lisammckeown

Touted as a 'serous comedy based on the rich, witty and often passionate correspondence' of two huge theatre personalities - George Bernard Shaw and the actress Mrs. Patrick Campbell - I was full of anticipation as I entered the intimate upstairs space of the Berkeley Street Theatre. Not to mention intimidated as an anglophone. It felt like a huge portion of Toronto's francophone community had turned out for the opening night of this show. Not least, I'm sure, because the two characters would be played by two actors who are themselves likewise big names of the theatre world: Louise Marleau and Albert Millaire.


The play traverses the 41 year correspondence between the Irish playwright and the English actress. The play was first adapted for the stage in the 1960s by actor Jerome Kilty, translated later into French by the poet Jean Cocteau. The letters recount the arc of the long term emotional love affair between the two, despite their respective marriages and various other logistical barriers to their being together, like illness and geography.

Not being fluent enough in French myself to follow the dialogue entirely, the surtitles in English provided a helpful assist in following the dialogue. I found myself wishing I were more fluent, to get a better sense of how the poetry translated from Shaw's native dialect. The visual aesthetic of the presentation, though, was undeniably gorgeous. The costumes were elegant: Millaire wore a simple white linen suit that popped under the soft lighting; Marleau was in a contrasting black and white polka dot two piece. They fit well against the simple set which consisted of two writing desks, a stool and a chaise lounge.

And it's a compelling story to follow, though not the great love story I was expecting, and throughout the show I found myself wondering about the nature of connection. Shaw always claimed he was 'violently in love' with the actress, but of course was never free to make good on that claim by way of marriage; he accused her of messing him around, of playing with his feelings when she allowed herself to be courted by other men, eventually re-marrying after being widowed years before. There was a scene where she was to play Liza in the first production of Pygmalion: a story of an upper class English gentleman trying to make a 'lady' out of a young cockney girl. The story of Pygmalion rings of a man trying to mould a woman into what he wants, into what he considers appropriate or desirable, and one wonders if Shaw did this to an extent with Campbell. In other words, in a way, the play is about two people who connected not with each other, but with an idea that they had of the other. During a scene where she's gone to the seaside and clearly and emphatically asked him to stay away, he follows her anyway, resulting in a spat during which she chastises him for being disappointed in her for failing to be the person she never was in the first place.

Ironically, that was one of the most poignant moments of the show. The actors both had an excellent stage presence, and I could see how they had drawn such an enthusiastic turnout. But what was surprising to me is that they read from scripts for almost the entire show, boxing them in both physically and emotionally. In theory maybe this is a good idea: the dialogue comes from letters, from the process of reading and writing, and I can see how that would be an attempt to recreate that epistolary basis of their relationship. But it ended up feeling reminiscent of watching a rehearsal. And I still can't decide if that is in some ways accidentally yet appropriately consistent with the theme of not quite connecting. Regardless, it was an unfortunate clash with what seems to be the intention of the show, which is to get the letters off the page and into the visceral space of action. I would really love to see this piece done with less reading and more interaction between the two, because in the few moments that happened, the feeling was electric. Even if they had used the scripts half the time, there would have been more contrast and more opportunity to really light up the chemistry between these two intense personalties.

Running time: 75 minutes, no intermission.
Posted by THE CHARLEBOIS POST at 7:12 PM