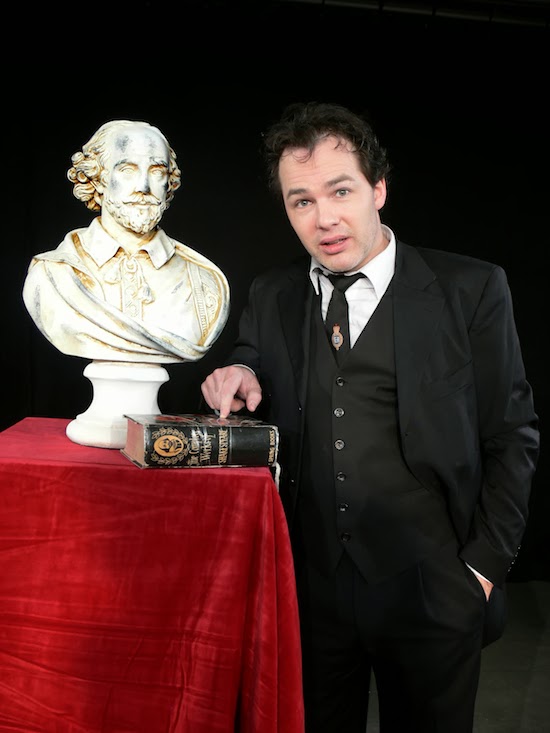 Eckert
Theatre and the Power of the World Wide Web
by Keir Cutler
On March 23rd of last year, I received a surprising email from a stranger in Germany.  It read in part,
“Dear Dr. Cutler,
First I want to introduce myself, my name is Gregor Eckert, I live in Minden near the City of Hanover in Germany. I am father of two children, my wife is the director of the communal theatre in Minden (you van take a look here:  www.stadttheater-minden.de ) and I am an actor. During the last couple of years I played about six different one-man-shows, including Gestatten! - Mark Twain (you can watch it here: www.gregor-eckert.de ). This might be the reason, that already in 2009 I made the "online-acquaintance" to your excellent play Is Shakespeare Dead? I must admit, I was impressed and since that time I couldn’t get rid of the thought to produce this masterpiece in and for Germany, and of course in your, Keir Cutler’s, way and conception. … I hope to hear from you.  With kind regards.  Gregor Eckert”

I was obviously thrilled that someone in a country I’ve never even visited, wanted to translate my work into a language I don’t speak, and perform it.  Oh, the power of the world wide web!  We started a correspondence that has resulted in the  German premiere of Ist Shakespeare Tot on the 8th of March, 2014 in Hanover, Germany.

Now that Gregor is only a couple of weeks from opening his version, I’ve asked him to tell me how the experience has gone.  The following is his report.  I haven’t rewritten it, since his English is excellent, while still preserving a flavour of his native German. 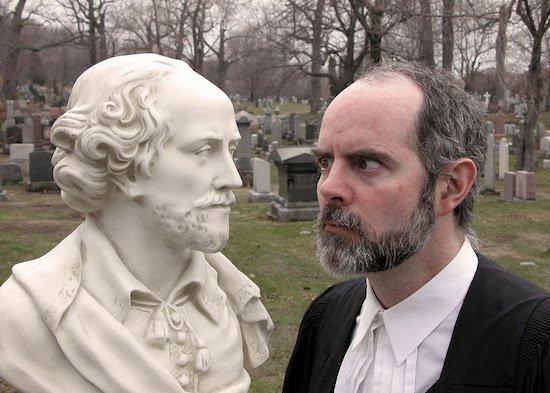 Cutler
“Hello Keir,
This is now my report about my work and experience with Is Shakespeare Dead, especially about difficulties with translation and special rehearsal circumstances.  It has become longer than I thought, and perhaps longer than you wished, but it was a good experience for me, and a winning exercise to improve my written English. Use or not use any content, just as you prefer.
Mark Twain born Samuel Clemens spent about 10 years of his life in Europe, and also in Germany, but not many people knew about this, except the real “Twainiacs”, and so I thought, it might be a good idea to realize a play in German, showing Mark Twain as an entertainer on stage, according to the model of Hal Holbrook or nowadays Val Kilmer.
During that time, I read more stories by Mark Twain, with special interest on less known or even unknown books.  One of those was Is Shakespeare Dead and a short passage that I perform is taken from it.  It’s the story about his Captain George Ealer on the Mississippi boat, Pennsylvania. This man used to quote long Shakespeare passages from Hamlet, Othello and Romeo and Juliet and others, mixing it up with his pilot commands to the 17-year-old Sam Clemens, who was getting dizzy by trying to steer the boat.  And for the whole rest of his life, still as an old man of 70, Mark Twain was not able to read any Shakespeare passage without the sound of George Ealer's commands between the lines.  My audience liked that story very much. You can watch it on my show reel website.
Still 2009, during my internet inquest to that passage I suddenly alighted on your YouTube video Is Shakespeare Dead? with Keir Cutler, Ph.D.  I thought: “This is great, someone should do that in German!”  Well, I put it aside, and finished my solo-program   Gestatten!  -  Mark Twain! (Would You Mind?  –  Mark Twain).  I was not at all aware, that I could ever do this. I was just very happy, when Gestatten! – Mark Twain! finally succeeded. I’ve been playing it for the last 4 or 5 years, and it will go on.
It is Mark Twain himself who gives the best description of my difficulties to translate your adaption of Is Shakespeare Dead? into German. It is less a problem of understanding, it is more to find the right words in my mother tongue. You can wear yourself down, I can tell you.  I see now, Twain was absolutely right in his complaints about the German language: It is the “long words and sentences” with verbs at the end.  And this complicates getting to the point.  As Twain wrote, “Surely there is not another language that is so slipshod and systemless, and so slippery and elusive to the grasp. One is washed about in it, hither and thither, in the most helpless way; and when at last he thinks he has captured a rule which offers firm ground to take a rest on amid the general rage and turmoil of the ten parts of speech, he turns over the page and reads, "Let the pupil make careful note of the following exceptions." He runs his eye down and finds that there are more exceptions to the rule than instances of it.
Is Shakespeare Dead? of course is highly sophisticated and thoughts come very fast. But it definitely needs more time to bring out those different things in German. What else could explain that you need 45 minutes to perform the show as a whole, whereas I will need estimated 60 or 65 minutes, or even more.
In some other cases to keep logic, it is necessary to split an English phrase into two or even three in German.  For example the passage about “the troglodytes.”  I have despaired.  Your way is very elegant. The word “troglodyte” of course also exists in German. But my first listeners found, that it was really strange.  So I started to use it as a comedy-word. The result was, they were laughing, when I started to do that, so I think, it could work.  But that is the point: I need more time for an explanation, not just for the meaning of the word “troglodytes”, the idea wants to be translated in a manner to let the audience feel entertained, not taught.   And Mark Twain is absolutely right: most German words are longer than their English correspondences.
I’m now rehearsing since about three weeks, my wife is taking care of me.  I have watched your video so many times now.  But I stopped doing that, I’m now just doing.  Occasionally a couple of students from our theatre-project Romeo and Juliet come to see, what I’m doing.   And sometimes, they even give the thumbs up, and then I think, “Ok!  I can go ahead.”
One last anecdote concerning the Shakespeare bust. You know, I ordered it from statue.com.  We don’t have any alternative in Germany. There is a company in Austria, they produce a Shakespeare bust.  But theirs is so heavy and big, you can’t hold it for a minute.  So my “ Stratford-lad” came from Edwardsville, Illinois, and really didn’t have any problem to get out of the U.S.  But as it arrived in Germany, I don’t know exactly why, but some officers must have become suspicious. Instead of delivering Will Shakespeare to my house, I was summoned to customs to explain content and rationale of this article. Imagine! - William Shakespeare made German custom officers smell a rat! -  We don’t need any more proof, that something is really wrong with that guy. 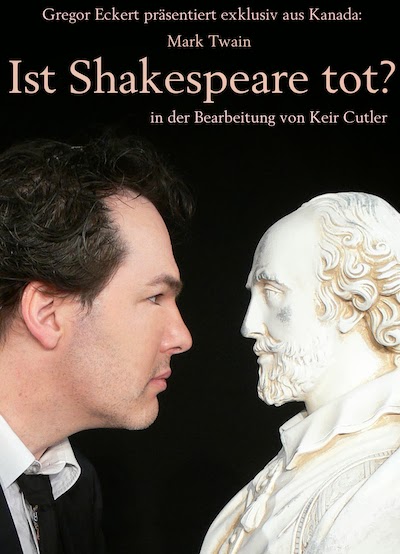 But seriously: The atmosphere in Germany concerning the authorship question, I certainly can’t give an objective description. Let me try it this way: Take some of the greatest poets, Germany ever had. Goethe and Schiller are well known in the world, and perhaps Lessing. Lessing founded the first National Theatre in Hamburg in 1767.  Those great poets in Germany’s subconscious mind are like “little brothers” to the great William Shakespeare. It might be exaggerated, but they would probably never have existed without their great wise father William Shakespeare.   I think, that’s why there is a reserved attitude towards the authorship question in Germany .  Germans say: “Let the British and all other English speaking nations get along with that problem.  As long as there is no revolutionary and clearly defined knowledge and proof, we are not going to change the official attitude. The best way is not to talk about it.”
I have correspondence with our Shakespeare Globe Theatre in the German city of Neuss. The director told me, he knows about the problem, he’s aware of all different positions and arguments, but he doesn’t want to have anything to do with it.
Worst case with my translation is, that my audience is shocked, and stay at home.  A damage of the theatre’s reputation.  But things move, even in our “German Shakespeare Society,” as documentary film director, Klaus Bredenbrock told me, “Let’s see what happens.”  I share the conclusion of his documentary film The Naked Shakespeare:  We all should relax. Be astounded by the works, and accept that there is more than one possible answer to the authorship question.
OK., it's now 2 a.m. - Good Night. ;-)
Best regards!  Gregor”
I am obviously hopeful Gregor will have a long and happy experience with Ist Shakespeare Tot.  I premiered my version at the 2002 Montreal Fringe, and have performed it across Canada and the US at festivals, schools, universities and conferences ever since.  My performance was filmed live at the Winnipeg Fringe Festival and broadcasted several times on BRAVO!  It has been one of the great joys of my life speaking Mark Twain’s words and bringing some much needed balance to the Shakespeare Authorship Question which remains as one of the world’s foremost authorities on Shakespeare, Professor James Shapiro of Columbia University, says, “virtually taboo in academic circles . . . and walled off from serious study by Shakespeare scholars.”

To Gregor I say, “Merde!”
See also: Keir Cutler performing in the Winnipeg Fringe production of Is Shakespeare Dead
Posted by THE CHARLEBOIS POST at 12:03 AM