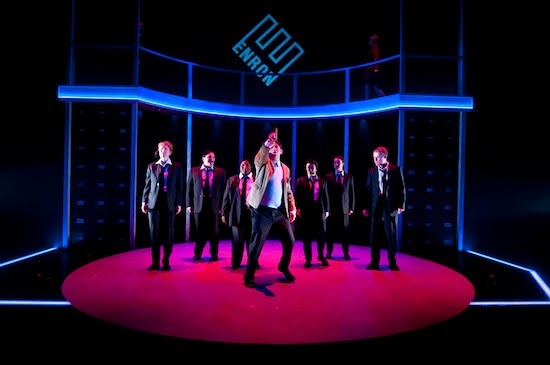 (photo by Andrée Lanthier)
The Shadow of Money
by Jim Murchison

Lucy Prebble has written a play that examines modern day hucksterism. The financial 911 that hit the world after the attacks in New York and Washington may well have been the more potent terrorist attack. I do not mean to belittle the devastating loss to the victims and families of the twin towers and the flights that went down but the greater threat to society as a whole appears to be corporate greed perpetuated and enabled by governments dedicated to propagandizing and myth making hyperbole.

Director Ron Jenkins has created a fast paced multi media presentation that dazzles and mesmerizes an audience in the same way a magician might with an incredible illusion. The play emulates the subject matter which is flash and smoke and mirrors, but the play has considerably more substance.

With song, dance, puppetry and lights the play maintains an atmosphere of a group of partygoers riding the crest of a wave. There is flash, confetti, money and music everywhere. The pace is kept going largely because of Michel Walton’s set design that has two levels separated by a scrolling marquee so that the action never pauses. We’re kept informed of the historical context as we travel through the Clinton and G W Bush years and into the new millennium by the projections and sound bytes on the upstage upper level.


The core of the play is arrogance, self entitlement and greed. Dmitry Chepovetsky as Jeffrey Skilling embodies these characteristics in spades. He is so smarmily superior and brighter than everyone that you are rooting for him to fall. He does anchor his performance with just enough charm that you don’t spit at him and leave the theatre. He is a very interesting character and this is my favourite of Chepovetsky’s performances this year.

Petrina Bromley plays the arch-nemesis Claudia Roe with an aggressive sexuality that is really about her lust for power. She can turn it on and off, go from flirt to ultimate fighter at the drop of a hat, or more appropriately the flick of a light switch.

Joey Tremblay is the elder statesman, a stogie puffing good old Texas boy, hobnobbing with senators and presidents, who is content to the look the other way.

Eric Davis as Andy Fastow is the financial officer that provides the blueprint to the subterfuge at Enron. He probably is the character with the most personal growth as he goes from pandering yes man, to desperate, to arrogant before surprisingly discovering a conscience.

Except for Chepovetsky all of the actors play multiple roles. I particularly liked Sheldon Elter and Tremblay as the Lehman Brothers played as a conjoined Tweedledee and Tweedledum. They were hilarious.

David Coomber, Leah Doz, Christine Brubaker, Quancetia Hamilton and Eliza-Jane Scott complete the cast of the last play using the ensemble this season and I will miss the wonderful work of this year’s company.

You will recognize nods to pop culture like Jurassic Park, Star Wars and the three blind mice throughout the evening. By the end of the play I saw the mice as blind ambition, blind faith and blind greed.

There is no justice: and there is no money. In a time where the richest country in the world has hundreds of trillions of debt how can any of this money be real? Maybe the entire financial system is a fake. Enron, the play is real though and it’s great!

Runtime: approximately 2 hours 30 minutes with one intermission.
Posted by THE CHARLEBOIS POST at 5:36 PM