Review: (Vancouver/Dance) Me So You So Me 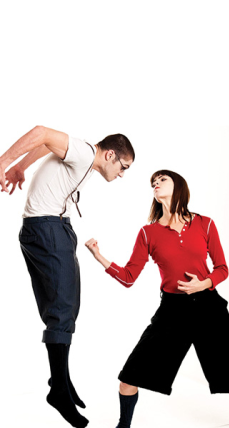 David Raymond and Tiffany Tregarthen are young dynamic, engaging, and brilliant dancers. They have created a series of colourful vignettes that merge cool athleticism with light and sound. They are quite accomplished and sexily playful. But what does it all add up to?
The first couple of pieces are solos and each piece segues into the next in a clever and fun way. In one section Tiffany is tangled in a rope and then gets pulled off stage right. David enters pulling the rope onstage left. When she has disappeared he drops the rope and starts a new sequence.
In a dynamically lit (designer James Proudfoot) sequence David dances through a series of six light squares to a song that has key lyrics projected and Tiffany rolls into the light revealing them like a James Bond opening title scene.
As the show progresses they start dancing more together; they are cute with each other and appear to be brother and sister or neighbours exploring the world of childlike imagination and play.


She moves like a cartoon or bird, with quick light movements. He is muscled but surprisingly fluid, moving more animalistic. The choreography especially when they are both working together contains fun, surprising pops and flourishes. They both use their faces and expressions to great comic effect.
I am the first to admit I do not know a lot about modern dance and I enjoyed their skill and playfulness. I applaud the athleticism and was often dazzled by the cleverness, but I was never engaged emotionally.
Feb. 25 - Mar. 1
Posted by THE CHARLEBOIS POST at 5:43 PM

Email ThisBlogThis!Share to TwitterShare to FacebookShare to Pinterest
Labels: cultch, dance, David C. Jones, me so you so me, vancouver