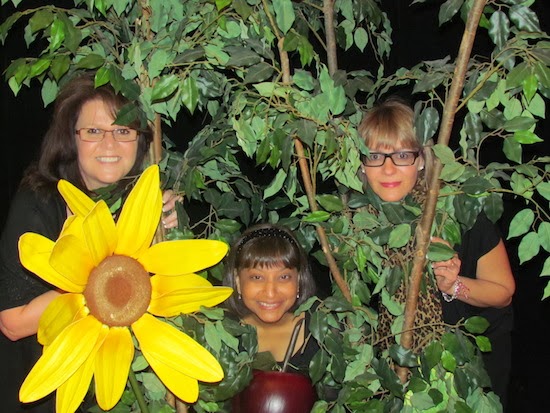 Founded by three educators Ada Masciarelli, Michele Matthews and Tricia Bartley, the I Can Dream Theatre Group is a community based organization that gives young adults with special needs the opportunity to develop their talents in the area of the performing arts. At the same time promoting commitment, responsibility, self-confidence and friendships in order to enrich the lives of the individuals involved. Ada, Michele and Trish have over 70 years combined experience working with individuals with special needs.

This has now become the official motto for the I Can Dream Theatre Group, an English language performing arts group for special needs adults. With over six productions under their collective belt (and a new one underway), their shows are a mix of pop culture fun, original dialogue, some fancy footwork and powerful singing the likes of which you have never heard before. On April 26th, 2014, the group will be performing  'unplugged & ONE NIGHT ONLY' music showcase show that will highlight songs from past productions, as well as some new songs. And on November 14 and 15, 2014  the group will be performing their latest production entitled Hannibal The Musical (yes, we're taking about that Hannibal, as in Hannibal Lecter) at the Oscar Peterson Hall at Concordia University.


the more Masciarelli asked of her cast regarding dances and line memorizing,  the more they delivered

So how did all of this come about? Ada Masciarelli (Writer/Director), Michele Matthews (Musical Director/Choreographer) and Tricia Bartley (Production Manager) are all special needs educators by day, but each come with either a practical theatre or music background or a general interest in it.  What makes their collaboration unique is that they each have a focus that they can zone in on when it comes to managing as well as developing their group.

"For me, theatre allows for expression of oneself," says Ada Masciarelli.  "I feel that that expression allows the person to gain more self confidence and awareness in themselves and more strength as an individual. For the special needs adults that we work with, I think it is a perfect vehicle in enhancing these qualities and building on them while either on stage or in other areas of their lives. And they seem to have a lot of fun doing it which makes the process much more enjoyable!"

Adds Michele Matthews, "(I love) the idea of having an opportunity for our students with special needs to have a chance to perform. There aren't many opportunities for them."

In 2003, the team Masciarelli was working with at her school decided, as an extra curricular activity, to implement a program that included performing arts. The musical "Grease" was chosen as the students all knew the film very well and  thought it would be easy for them to get involved and be motivated. Masciarelli  adapted the screenplay and the characters to fit the students’ personalities (a writing process that she still uses to this day) while still maintaining the story line that the audience is familiar with. After months of tweaks and refining, Grease-An Adapted Musical, was born. What was remarkable was that the more Masciarelli asked of her cast regarding dances and line memorizing,  the more they delivered. With the great success that the project had within her school, Masciarelli and her team had the opportunity to perform their "Grease" in front of an audience of more than 500 people at the Centaur Theatre. And thus, the origin of the I Can Dream Theatre Group began to take shape. With Matthews and Bartley on board, the projects began to become more faceted and brought forth new challenges and talents in  their ever growing cast. In 2011, the I Can Dream Theatre Group was officially formed, and since then, there has been no turning back.

Audience members leaving an I Can Dream Theatre Group production have reactions ranging from surprise and awe, to emotionally satisfied and joyous.

The group allows a forum for these adults to tap into what all of us love about the theatre: its immediacy, its universality and its interconnectedness amongst us all. What this group manages to do is diffuse the stigma around special needs individuals and ultimately show that we share the same wants and expectations when it comes to the stage.

Audience members leaving an I Can Dream Theatre Group production have reactions ranging from surprise and awe, to emotionally satisfied and joyous. There is something that is palpable in the air when their shows let out - big smiles on everyone's faces, and the countdown starts to the next production. Without fail, this is what happens at every show put on by this theatre company.

At first, the group was producing theatre productions at a bi-yearly frequency. As the demand and interest in the group grew with every production, the I Can Dream Theatre Group fully produces a new show every Fall. Their work ethic is a year round process. For an average rehearsal period, it would last a few months leading up to show time. For this group, because of the planning involved, as well as the managing of their group's needs and understanding how much they can take on, rehearsals begin close to 10 months before the curtain rises. Dance routines are needed to be learned, lines are tweaked and changed in order to accommodate each actor. This way, the range of expectancy for each cast member is attainable without the added challenge of feeling rushed.

The group functions like a well oiled machine at this point - why change what works! It is with the kind of love and attention that Masciarelli, Matthews and Bartley put into each piece of the puzzle that the final product manages to be so nurtured, so real and so inspiring.