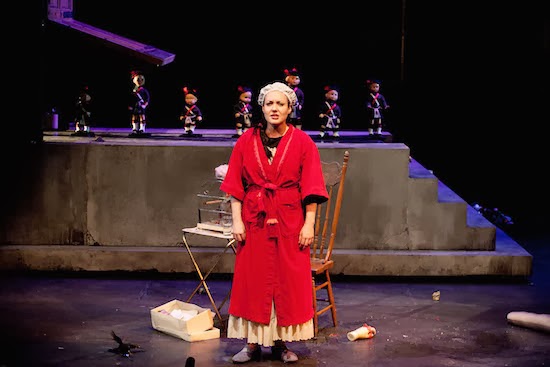 War is Not Enough
by Caitlin Murphy

Setting one's sights on grand subjects like WWI, an artist is always wise to zoom right in – find the specific in the epic, and tell an ostensibly humble tale as a microcosm of the grander narrative. In this regard, David Fennario's play Motherhouse is promising. Inspired by a photograph of women workers at a British Munitions Factory, the legendary playwright focuses his attention on one woman in particular; moved by the defiance in her eyes, he imagines her as Lillabit, a feisty Protestant Anglophone, living and working in Verdun during the first world war.  From this beginning though, more flounders than flourishes in the Centaur's production of Motherhouse.

Plagued by clarity and structural issues, as well as a distinct lack of dynamics, the meandering tale fails to provide a clear hook for the audience to grab onto.  Though we sat in house lights the entire performance, meant to make us feel more involved in the narrative, we wound up feeling oddly left out.


The various pieces of the set – brick walls, a projector, images of war propaganda – made the world of the play feel random and incoherent, and seemed to speak to a play that had trouble finding its centre.

In the role of Lillabit, and essentially carrying the piece, Holly Gauthier-Frankel moves between story-telling and singing with confidence. But her performance ultimately buckles under the weight of the play's problems. Most of the evening was spoken in direct address to us from centre stage, with delivery pitched at the same level throughout. Greater nuance and modulation in Gauthier-Frankel's performance would have added some needed movement and variation to the piece.

Supporting Gauthier-Frankel on stage are Delphine Bienvenu, Bernadette Fortin, and Stephanie McKenna serving as a chorus of sorts, offering sporadic sonic or visual punctuation to the narrator's story, with Fortin also providing some lovely musical accompaniment on the fiddle. As the three women wander about the stage, entering and exiting, they struck me as tragically underused, especially for a story about women's role in the war.

Though director Jeremy Taylor clearly worked to invent bits of theatricality to animate the largely narrated piece, many of these felt shoved in, tacked on. The calm pacing also sometimes bordered on the lethargic, giving the piece the drive and momentum of a sigh. Clearly the company had fun playing with Fennario's text, riffing on its various images and ideas, but that work somehow failed to reverberate much beyond the apron of the stage.

The anti-war message is, of course, always a laudable one. But as one that's been made many times it puts even greater demands on artists to be innovative, original and persuasive. Motherhouse didn't have enough lung power to give it new breath.