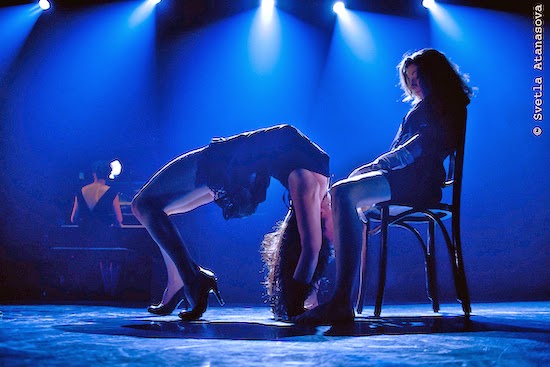 This past Thursday night, Monument National hosted two short performance pieces by Tangente. First came MISS, a piece created by Jade Marquis and performed by Joannie Douville, which follows a dancer searching to establish her persona as a performer while maintaining a sense of female empowerment. Douville does well to fully use the intimate space of the venue, travelling slowly through the audience as she delivers an interesting take on the nature of the dance scene. While my choice to sit in the balcony section of the venue hindered my visual experience of the piece, causing me to lean over the railing in order to get a shot of Douville entering the room from under me, the piece nevertheless had its effect. MISS managed to raise questions regarding our notions of the female image in dance culture while at the same time displaying the various personas females can take on when performing. Although I did not grasp the meaning surrounding all of the projected images accompanying Douville’s performance, the piece as a whole was intriguing and at times thought-provoking.


Next came MANGE-MOI, a short piece both conceptualized and performed by contortionist Andréane Leclerc. Marie-Ève Bélanger performed alongside Leclerc while Luce Bélanger played some eerie piano notes, setting the mood for this strange and raw performance. In the hopes of unveiling the simultaneous malleability and fragility of the human body, Leclerc contorts her naked body on stage as a seated Bélanger looks on with great intensity. While some sensuality and impressive back bends peppered the piece, the meaning of it all was unfortunately lost on me. The use of mirrors which reflected the details of movement back to the audience was interesting, but I nevertheless had trouble grasping what the intention was behind the choice to display the contorted female body in such a suggestive way. That said, the effort and thought put into creating this piece and the interesting way in which vulnerability was exposed during the performance were definitely noteworthy elements of the show, thus making MANGE-MOI a strange yet intriguing visual piece.