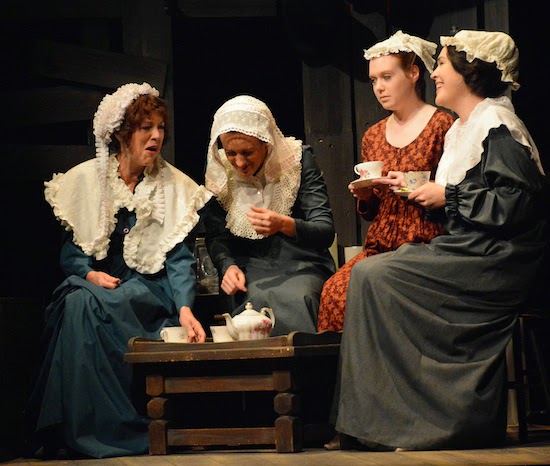 Charles Dickens wrote The Old Curiosity Shop as an on-going story with regular instalments in 1840-41. Like most of his works it deals with social justice in 19th-century England, particularly concerning youth and poverty. This stage adaptation is by Simon Webb and is directed by the apparently everywhere Sarah Rodgers! They have quite a task trying to wrestle a long sprawling serial with dozens of characters, into a two-hour show.

This story focuses on a young girl and her grandfather who live in the curiosity shop. The unnamed grandfather tried to secure a better future for Nell by gambling. This puts them heavily in debt with a man named Quilp. The pair run away and meet many people. Back at the shop, Quilp takes over and Nell’s ne’er-do-well brother Frederick is mistakenly convinced that his grandfather has a fortune hidden away, so he convinces his friend, a gadabout named Dick Swiveller to marry Nell. Quilp arranges for Dick to work for a lawyer named Mr. Brass in order to keep an eye on him. A young man named Kit saves Nell’s canary and worries about her safety.  On the road Nell and her grandfather meet many people, including a pair of Punch and Judy actors, a priest and a cook who makes a fantastic stew.

To be fair, and this may speak more to me than the production, I had to look a lot of  that up on Wikipedia. In act one a lot of characters are introduced and it’s a tough time keeping up. Also our protagonists are not very clearly defined. Nell is simply sweet and the grandfather comes across as the gambling addict so he doesn’t elicit a lot of sympathy which reduces buying into their plight.

There are some terrific performances, the production looks fantastic, and things do get more engaging in act two.

Ms. Rodgers has assembled an amazing cast who do some wonderful work. The child actors are pretty great, Toby Verchere as Kit, Olivia Huntsman as Nell and Amitai Heyl as a young ruffian named Tom are natural and real.

Rose Lennox as a spying maid - named Marchioness by Swiveller - is deliciously defiant and saucy. Kristy Provan has a tricky role-playing the self-serving and cruel sister of the lawyer named Sally but she balances the villainy with need to make a very memorable smaller character. Equally skilled as the brother is Paul Griggs making lawyer Brass affable but corruptible.

In a remarkable performance of malice and cruelty is Kazz Leskard as Quilp. A little weasel of a man with a sickening smile, he at first comes across as a buffoon but quickly is revealed to be quite evil with no sense of personal boundaries. How evil? He constantly plies his put upon wife with alcohol and cigars. (Although it would have been nice to see what effect that has on her later in the story).

The whole cast of 18 is quite sparkling, and the production looks great!

The set by Carolyn Rapanos intriguingly places a multi-levelled structure rendered sparsely by 2x8’s on stage right and leaves some gang planks and walkways stage left, creating a nice juxtaposition of open dark unknown possibilities and a rumbled tangled dirty town. The lighting by Darren Hales creates the many different locales and moods and the costumes by Catherine E. Carr are suitably grimy having seen better days.

Another star of the evening is Pat Unruh creating a very effective live soundtrack with violins and piano.

If you are a literary fan or a lover of Dickens there is a lot to love here. Others may find it slow going.