Review: (Toronto / Theatre) Where the Wild Things Are 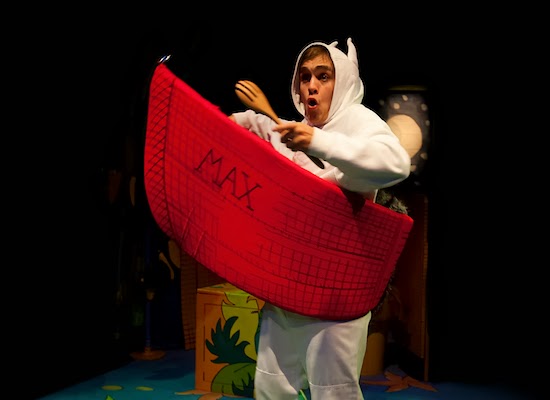 If you don’t leave this show with a grin on your face, you must be dead.
Even people who aren’t particularly fans of Maurice Sendak’s nearly wordless classic picture-book, Where the Wild Things Are, will be touched by the truly wonderful feeling created by this show. Presentation House Theatre of Vancouver brings their production of this guided play experience to the intimate studio space of Toronto’s Young People’s Theatre for the March Break, directed and adapted by Kim Selody for a slightly larger audience than the original British version intended. But it works.
A warning though: be prepared to participate. Shoes and coats are removed at the door. Kids sit on colour-coded tarps acting as islands. The scenery, props and costumes heavily borrow their sketchy aesthetic and colourful leafy style from a Sendak illustration, created by Linda Leon here. But really, this isn’t a show about the stage magic (though a number of kids loved the first noticeable lighting shift to night in my audience) – it’s about the magic of storytelling, imagination and performance.


Linda A. Carson, as the narrator, warmly welcomes the audience with her librarian-type charm and easy manner. She establishes the rules for how to be a wild thing, how to behave as an audience and introduces us to the story. At first, I wasn’t sure if she worked at YPT, was a parent or teacher present with a class or was an actor, she is so natural in her role (which will also double as Max’s mom in certain scenes). Carson knows how to control the audience if it gets unruly and she engages them beautifully in discussions – she has these kids eating out of her hand, and deservedly so.
Then, late as you’d expect, in walks Max (Raes Calvert), dressed in his white track suit. Calvert projects innocence like few actors have in my experience. There isn’t a note of falseness, insincerity or even mischief in his unselfconscious performance. Max is part of what makes this a show for everyone – at many moments in the play, it’s a participatory experience. Kids are asked to roar as their own Wild Things or to help create action or sound of the waves of the ocean that carries Max to the faraway land. But not only the kids: adults have to help pass along a vine or wear a funny mask too – or face the embarrassment of being picked on by Calvert.
The structure of having Max tell us what happened, egging the room to transform into a jungle or an ocean, is simple but effective. The time spent on the island is just enough (and manages to have a real Royal Rumpus dance party for the kids!) though the trip there sometimes drags a bit. Naturally, each audience will determine how long the show is by how much participation occurs. However, the idea of having the audience be the Wild Things, to acknowledge that our imaginations are stronger than any actor in a costume could portray, is a wise choice. And quite true to life.
This charming show involves everyone and – as Sendak loved to do – touches the heart of anyone who attends. Because really, there’s nothing to be afraid of: we are the wild things, they live in our head… but like any good child, after we’ve had our fun, we can put them away and go back to our bedroom for dinner any time we want.
Mar. 4 - 30
Posted by THE CHARLEBOIS POST at 6:41 PM

Email ThisBlogThis!Share to TwitterShare to FacebookShare to Pinterest
Labels: jason booker, theatre, toronto, where the wild things are, YPT