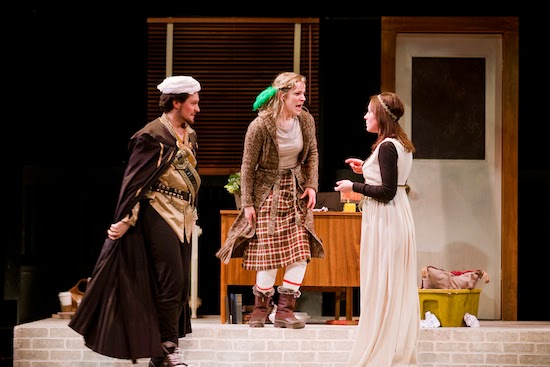 When I entered Hart House Theatre I was filled with gleeful anticipation. Goodnight Desdemona (Good Morning Juliet) is a play with a special place in my heart, as it was one of the first contemporary plays I fell in love with when I first saw a production of it in high school, at Toronto's Upper Canada College. A few years later I was lucky enough to get to see the play with none other than the author herself, Canada's own Ann-Marie MacDonald, in the lead role as the relentlessly self-deprecating academic Contance Ledbelly. Hart House's current production had a lot to live up to.

The multi-award winning play, directed by Carly Chamberlain, is well deserving of the hype - both of the play and this production. Constance Ledbelly, (Lesley Robertson) is  "an overlooked academic trying to prove her theory about two of Shakespeare's best-known plays" - a theory, more specifically, about "Othello" and "Romeo and Juliet" - two tragedies that don't follow the traditional tragic tropes. And then it happens, Constance falls down the rabbit hole - or, in this case, the trash can - into the world of these two Shakespearian plays. And what she discovers there is something essential to living a good life, but also frustratingly elusive: a true sense of self-worth.


And she discovers this, in part, through a meeting of not just Othello, Iago, and Romeo, but more importantly MadDonald's comic but poignant re-envisioning of Juliet and Desdemona, two heroines that have been, as Constance quips, pretty 'watered down' by the Bard. The play passes the famous Bechdel Test - a  test that in order to pass, the narrative must contain two named female characters have a conversation about something other than a man - but it does more than this. It tells the story of a woman struggling to find herself, and also provides a platform for something we don't see nearly enough of: women being breathtakingly funny.

Robertson is great as Constance, capturing her awkward enthusiasm and self-effacing charm. Cydney Penner portrays an Amazonian Desdemona brilliantly, and Katie Ribout plays a marvellously melodramatic Juliet. Both ladies cheer on and defend, and, in Juliet's case, seduce, Constance through a captivating journey to find the 'true author'. And we can't forget about the men: Nicholas Porteous is a delightfully goofy Othello, and Nathan Bitton plays a bitingly embittered and sour Iago. But as a woman who has been part of both the theatre and the academic worlds, it was heartwarming and delightful to see three women given the opportunity to portray three differently intelligent, hilarious, and complex roles. A favourite moment was when, after Constance had been admitting how much flak she takes in academia as a woman, Desdemona engages her in a battle-cry of a glorious round of 'Bullshit! Bullshit!'

The set is divided into three sections - the centrepiece is Constance's dingy assistant professor office at Queen's University in what Desdemona will refer to as the 'World of Academe'. Stairs at stage right and stage left provide two lower levels for the two worlds of Desdemona and Juliet respectively. The divisions were practical insofar as they created a nice break between the office and the world of the plays, but also nicely framed the three worlds of the three female characters. The fight direction choreographed by Jeremy Hutton was also fantastic, balancing both grace and comedy, as when Constance intervenes in a joust between Desdemona and Iago, only to have Desdemona shriek that it was just a practice, not a real fight.

There were a few moments where I wished Ledbelly had stronger projection, but only because she was drowned out a few times by both the music, which punctuated the action well but was a tad loud, but also the laughs that she elicited from the audience regularly throughout the show. And the only other complaint I have is that I wanted more. More of this kind of show, more of these kinds of opportunities, more of this kind of alchemy. A definite must-see.

Running time: 2.5 hours, including intermission
Posted by THE CHARLEBOIS POST at 8:10 PM