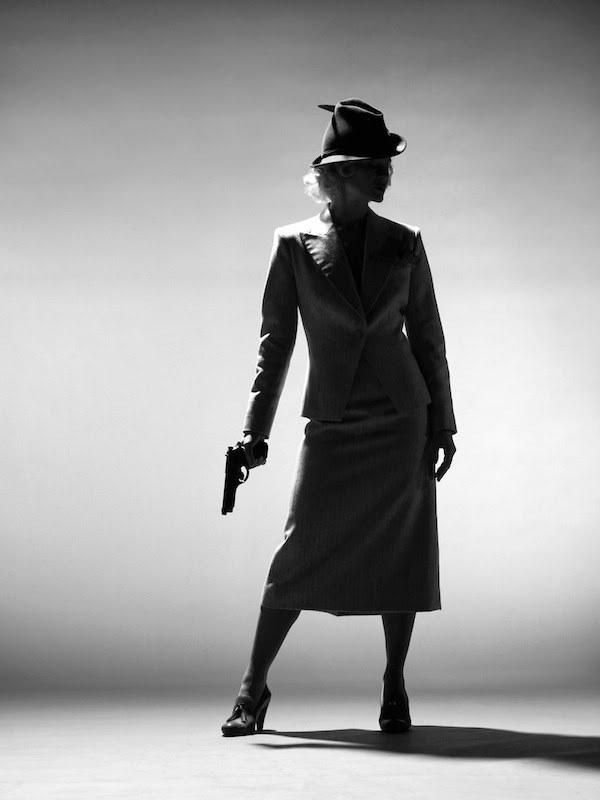 Lisa Ryder (photo by David Cooper)
Like a movie, but performed live
Helen Lawrence innovatively brings a slice of Vancouver’s past to life
by Chris Lane

Seeing Helen Lawrence is like watching a live performance of a movie. It combines the power of film to transport you with vivid visual scenery and to get up close and personal with actors, while at the same time delivering the energy of a live performance – thanks to the magic of projections.

The play uses an innovative mixed-media style to transport the audience just down the street to two parts of Vancouver that no longer stand: Hogan’s Alley, and the old Hotel Vancouver, which both have distinctive roles in Vancouver’s cultural history. The story takes place in 1948, a year before the grandiose Hotel Vancouver (second of three) was demolished, when the hotel was still being used to house Second World War veterans. Hogan’s Alley was the hub of Vancouver’s black community, as well as being a centre for gambling, drinking, and the sex trade – just a few blocks away from the present-day centre of the Downtown Eastside. This play brings together a cast of characters from both places, alongside the police who go between the two.


The actors perform on a bare-bones set in front of a green screen, while simultaneously being captured on camera. Their actions are projected onto a large screen on stage, which sets them against vivid scenery, giving the appearance of a live-action film shot on location.

The creator of the show, visual artist Stan Douglas, has undertaken a very ambitious project, which could easily have fallen flat with projections that weren’t up to snuff. Fortunately, the production is very successful in projecting the characters onto the different backgrounds, and the effect is not distracting or confusing, but very easy to watch. This modern take on theatre brings together some of the best things about both film and theatre. The detailed virtual sets allow the audience to get a vivid picture of 1948 Vancouver. But it’s not just like watching a movie; because it’s all performed live, it captures the immediacy of live performance and connects to the audience in the way only theatre really can.

The intrigue begins in the very first scene, with the title character being subdued in a psych ward as doctors discuss whether or not she really committed the murder she’s charged with. The story skips ahead to her travelling from Los Angeles to Vancouver, as we see her look for a man that landed her in such a predicament. Alongside this story is one of power politics around the control of Hogan’s Alley. The community is struggling to find its place in post-war Vancouver, as race politics are shifting. The black community’s standing is changing as other groups are now seen completely differently, such as the German and Japanese residents (who are also represented in the play). Two kingpins of Hogan’s Alley hotspots are eking out their positions, now that one has come back from the war, while the police are trying to control who will win and who will be forced out.

The actors clearly have experience acting for both the screen and the stage, as their performances by and large need the subtlety of screen acting. Lisa Ryder is particularly strong in the lead role of the enigmatic Helen Lawrence, while Crystal Balint and Allan Louis also stand out from a strong cast.

The story is absorbing and multi-layered, but the play has a large number of characters and sub-plots for a relatively short piece. The different stories end up spread quite thinly, and at times the play races forward leaving the facts a bit unclear. But the plot isn’t really the main point of this production. The setting is captivating as it’s a rarely depicted but pivotal time and place in Vancouver’s history. And most of all, this production is about experiencing a new way to watch a story being told – one that skilfully combines the merits of film and theatre.

The world premiere of Helen Lawrence, directed and conceived by Stan Douglas and written by Chris Haddock, is being presented by the Arts Club at their Stanley Industrial Alliance stage.