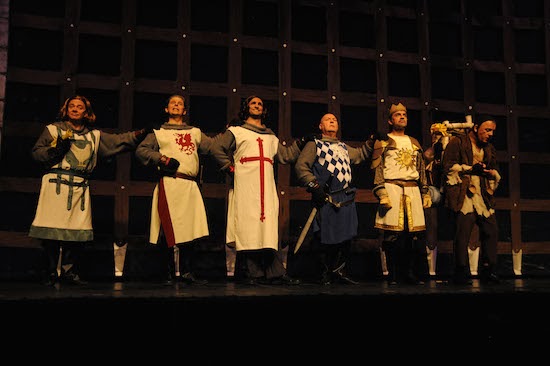 And Now for Something Completely Expected
by Jim Murchison

In the beginning there was Monty Python's Flying Circus. Now to say that the British comedy troop was the genesis of irreverent comedy on television would be unfair to the pioneering TV comics of the 50's, but certainly the film Monty Python and The Holy Grail is the source for the play Spamalot. The subtitle refers to it being “lovingly ripped off from the motion picture”. That is why it is a Monty Python work and not truly just an Eric Idle work although he has the sole credit for the book.

Monty Python fans expect things and that is what they get with this Orpheus production directed by Bob Lackey, with musical direction by Terry Duncan and choreography by Christa Cullain. That's as simple as I can put it. For people of my generation they will have seen almost every moment; many in the audience will likely be able to recite sections of dialogue. I don't need to put out spoiler alerts because the film has been around for almost 40 years. The only thing that is unusual, is a film being the inspiration for a play 30 years later rather than the other way around but then Monty Python never concerned itself with the conventional.


Except for Thomas Franzky as King Arthur, Réjean Mayer as Arthur's manservant Patsy and Andréa Black as The Lady of the Lake everyone plays multiple characters. These three actors have good chemistry with each other and seem to have a great deal of fun. Gab Desmond is also particularly good as Dennis\Gallahad and Jim Tanner as Dennis's mother but really the humour comes out largely in the ensemble bits that highlight the class structure and the performances of the townspeople, serfs, guards and plague victims of the entire cast create the fun for me.

The standard musical numbers are there, but in Pythonesque fashion they are performed and lampooned simultaneously, hence the love ballad title, The Song That Goes Like This. Also the expected vocal gymnastics are done in a staccato way that underlines the formulaic convention of the standard musical. In particular the solos for the diva Lady of the Lake, are performed with a wink at the audience by Ms Black. Is it a coincidence that the monogram for her character would be LOL?

The little twists and changes that make the movie a play are just adjustments. It is Eric Idle's lyrics and John Du Prez's music that are the big difference and the reason that Spamalot is an excellent choice for Orpheus. For the very few that would not be familiar with the movie or with Monty Python they will decide if they like it. For everyone else? They just want to know whether it's done well and it is. In many ways it is like a tribute band doing a concert. Fans of the comedy troop should love it.

Runtime: approximately 2 Hours  20 minutes with one intermission
Posted by THE CHARLEBOIS POST at 4:53 PM