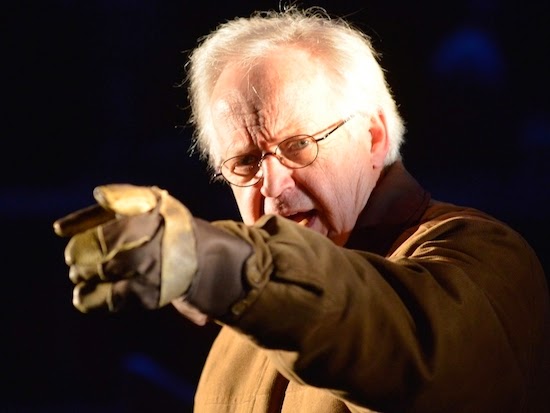 Julie Fox's set strikes you on different levels. There are a number of lab tables filled with scientific instruments, there's a model of a double helix DNA molecule down stage right. Cameras stage left and right and a large screen covering almost the entire width of the upstage area. The stage itself at the start is bathed in bright green looking like a freshly seeded field. The actors are milling about the stage many in lab coats conducting experiments or discussing the results, one would imagine.

This is a Porte Parole (Montreal) production and it commences with a prelude. The audience is informed that it is helpful for the development of this style of documentary theatre for them to come into the audience and get some of our opinions. It seemed more like red carpet interviews at the Academy Awards to me than investigative journalism. People were complimented on how attractive they looked and applauded for their good answers. Perhaps it helps the playwright, Annabel Soutar, but it was pandering, unnecessary filler for me.


When the play is launched we get to see an ad for Monsanto about how genetic engineering improves the lives of Canadians and we meet the characters. There are lots of interesting characters in this modern David and Goliath story and they are well played.

Eric Peterson as battling farmer Percy Schmeiser even received spontaneous applause for one passionate speech he delivered in the second act about genetic contamination. As the only actor playing a single character he is consistent and strong.

Tanya Jacobs I also thought was wonderful in a number of roles ranging from Schmeiser's wife, a farmer and a giddy nun. Cofounder of Porte Parole, Alex Ivanovici does some great work particularly as defence lawyer Terry Zakreski and in a short appearance as the playwright's husband.

The cast is fine all around actually and the use of the multimedia is generally effective. What made this piece lag for me was the writing. I guess I am not a big fan of documentary theatre. Journalists on shows like W5 and The Fifth Estate do a better job of exploring these issues.

There are people that talk about why they liked a book better than a play or a film better than a book, which I think is silly. Obviously the medium you use lends itself to different strengths and different techniques are used to effectively relay a story or a point of view. This may not make a lot of sense to anyone, but to me this felt like a film trying to be a play.
I believe that there may have been a larger than average contingent of farmers and scientists in the house on this night and I am pretty sure that the real Trish Jordan who is a character in the play and the public affairs director for Monsanto was also present, so I eavesdropped briefly on some interesting discussions coming out of the theatre. That to me was likely the most interesting aspect of my evening, but I couldn't stick around for it.

Running Time: approximately 2 hours and 25 minutes with one intermission.
Posted by THE CHARLEBOIS POST at 5:12 PM