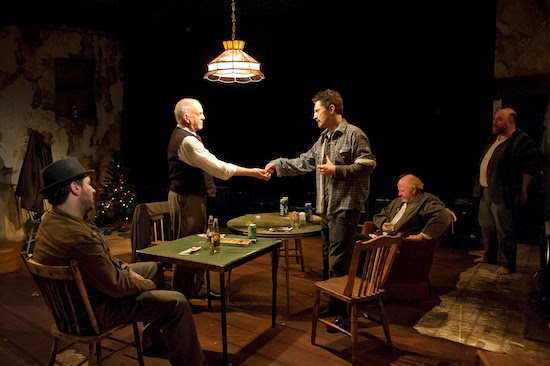 Pacific Theatre does the most soulful dramas in Vancouver. Because of its unique design you can see half the audience on the other side of the playing area; it really creates a community experience. You can check in with other theatregoers to gauge their engagement with the production.
Their new show is called The Seafarer and it’s by Irish playwright Conor McPherson. The show itself was written in 2006 and it was nominated for many awards but didn’t win. This production reveals why on both counts.
The story concerns a troubled alcoholic named Sharkey who is returning home to Dublin after getting fired from his job as a chauffeur. At home is Richard who is blind due to a dumpster accident. A regular visitor to the home is Ivan. While Sharkey is trying to stay off the sauce Richard and Ivan  can’t get enough.


It’s Christmas Eve and even though they are hung over, dirty, and smelly, they have invited Sharkey’s rival over to play poker on Christmas Day. But when Nicky shows up he has brought someone with him, Mr. Lockhart, who is not just a sharply dressed man it turns out.
These are rundown worn out drunks who like to fight but are mostly happy about it. There is a sign in the lobby that says something like ‘This play contains the most foul language possible’ as a cheeky warning.
The set design by Drew Facey is a dirty run down old house with peeling flooring and mottled walls. There is some stunning lighting by Lauchlin Johnston and the show has a soundtrack by Luke Ertman that permeates almost the entire show.

The actors are powerful, some of the best in the city. John Emmet Tracey carries the weight of Sharkey’s failure and shame so deeply that when he tells one story about getting into a bar fight his sense of humiliation is profoundly effective without being showy. Ron Reed is tragic as the happy blind drinker and he makes you laugh as you pity him. He is dirty, disgusting and mean-spirited but so happy it’s a delightful performance of a profoundly tragic man.  Andrew McNee as usual charms and he is the very best at saying the line text while chuckling. Tim Dixon is also very effective as the bumbling Ivan although on opening night some of his comic business was too self-aware.
John Innes as the mysterious Mr. Lockhart is magnificently full of cruelty and sadness. My companion and others in the audience guessed immediately who he was. I guess I’m naïve as it came as a surprise to me.

Young actors can learn a lot watching these artists perform.
Director Anthony F. Ingram creates a great sense of mood and  gets powerful raw performances out of the actors.  He can’t overcome some of the problems with the script. One of the reasons I suspect the show gets nominated for awards but doesn’t win is because for all of its great stuff there’s also a lot of boring stuff as the same thing keeps being said over and over again. You should never do or say the same thing twice and no matter how good the acting is this three hour play feels like three hours.
The good news is I have never felt so much joy during a show. As the drama gets to its end the sense of conclusive happiness made for a very powerful end to the theatre evening.  I just wish I didn’t nap along the way.
Mar. 7 - 29
Posted by THE CHARLEBOIS POST at 8:24 PM