Review: (Vancouver / Theatre) Whose Life is It Anyway? 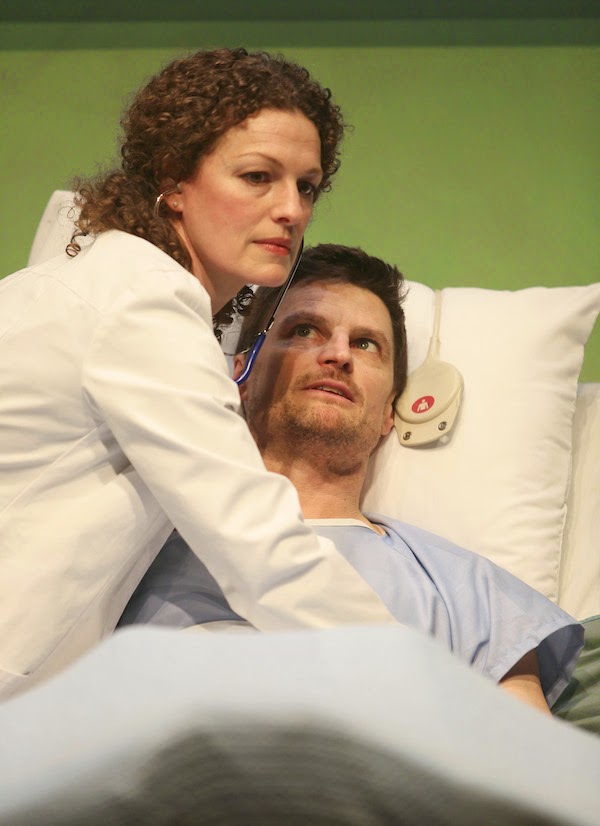 Jennifer Lines, Bob Frazer (photo by Tim Matheson)
Fighting for his death
A smart and darkly funny discussion of a contentious topic
by Chris Lane

Should a hospital patient be permitted to choose death over treatment?
Bob Frazer stars as Ken, who was recently paralyzed from the neck down in a car crash, with spinal damage so severe that the current state of medicine is incapable of helping him move his body ever again. He’s a smart, quick-witted man who carefully considers his situation, and decides he’d rather die than spend the rest of his life trapped in a body he can’t control. But the head doctor firmly believes that his duty is to keep his patients alive, and argues that Ken’s depressed state is preventing him from making a sound judgment. Caught in between the two is Dr. Scott (Jennifer Lines), who is struggling to judge what to do as a medical doctor and as a compassionate person who cares for her patient’s wishes and well-being.


Within the question forming the crux of this play lies a similar question: is a suicidal wish a rational response to a debilitating condition, or is it proof that Ken is not sane enough to make such a decision? The play is longer than most, but the length feels completely justified as there’s so much to be said to give full consideration of its central question.
Frazer remains on stage and bed-ridden throughout the entire production, with his body only moving when the nurses turn him over. His performance is powerful and highly nuanced, as he conveys his feelings without moving his body, but only through his face, voice, and head movements. His character tries to avoid becoming the object of pity, or a burden on those around him; it’s his humour that keeps the play from becoming depressing or uncomfortable.
The nine-piece cast is replete with talented actors, as each one skilfully portrays a different way of reacting to a paralyzed man who has chosen to die. As Dr. Scott, Jennifer Lines makes the audience relate to her character and feel her discomfort and inner struggle as she negotiates her professional duties and personal morals. Another standout is Patti Allan as head nurse Sister Anderson, as she finds the tenderness behind her character’s stern exterior.
The beauty of this production lies in its presentation of differing viewpoints on a highly contentious issue, without needing to paint any one character as a villain or a saint. Each character’s stance is clear and makes sense, even if they are starkly at odds with the other positions. Many playwrights seek to discuss hard-hitting subject matters through the platform of theatre, and this play is completely successful in that regard. It was written in the1970s, yet it remains current and relevant as the questions surrounding the right to die are far from being resolved in our society. The production shows that theatre is a valuable way of presenting the topic and promoting dialogue. It is just as thought-provoking and moving as theatre should be, while at the same time being darkly funny and highly engaging.
Whose Life is it Anyway? is directed by John Cooper, and produced by Realwheels Theatre, a local company with a mission to “produce performances that deepen the audience’s understanding of the disability experience.”
March 11 - 22
Running Time: Approximately 150 minutes including intermission
Posted by THE CHARLEBOIS POST at 5:18 PM

Email ThisBlogThis!Share to TwitterShare to FacebookShare to Pinterest
Labels: Chris Lane, cultch, theatre, vancouver, whose life is it anyway