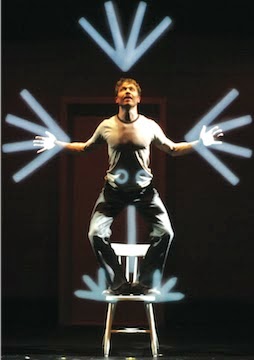 (photo by Victor Pilon)
Fusionism
by Chad Dembski
Norman is a Montreal original creation that has a had a healthy seven year history since its creation in 2007. Originally premiered at the National Arts Centre in Ottawa it has toured all over the world including France, Korea, Spain, the U.K., and the U.S. While multi-disciplinary work is not new to Montreal or Quebec it rarely can fuse together its various elements seamlessly. The collaborations often have unique results but come off more as experiments than a fully realized show. This is not the case with Norman where the fusion of text, choreography (by Peter Trosztmer and Thea Patterson), projection film (4d, Michel Lemieux and Victor Pilon) and hologram (yes, that’s right hologram!) come together in a stunning piece that still seems fresh in 2014.

Norman is a tribute to the National Film Board (NFB) films of Norman McLaren and his experimental films of animation and live action.  I went in knowing next to nothing about Norman McLaren and left with a deep appreciation of his dedication to experimental film and early animation. His presence is still felt in what is remaining of NFB (screw you Conservative government) and the strong animation still being made in this country.


The show begins with performer Peter Trosztmer receiving a cell phone call in the audience, (hilariously he still has the same prop phone from 2007) and walking onstage to continue his conversation. There is a quiet awkward tone to the beginning of the piece but quickly the stage explodes in film projections and the visual treats begin. Anyone interested in the possibility of projection in live performance has to see this show before it closes (for the last time). The unpretentious nature of the performance and choreography is mixed incredibly well with the awe inspiring film projections of 4d (Michel Lemieux and Victor Pilon).  The show has a simple premise, a man is doing research on Norman McLaren at the NFB and becomes a part of the world of these films. To be honest the text part of the show is the weakest link and feels forced at times to cram in as many facts about Norman as possible. It is this documentary aspect that presents new facts but actually takes us out of the surreal and interpretive world of these under-appreciated films.
I don’t want to go into too much detail about all the uses of projection or describe the holograms but know they did take my breath away at times. It was fantastic to see such complex and expensive technology used for an experimental performance piece instead of just Cirque de Soleil (they helped create Delirium in 2006). Norman is a fantastic piece of multi-disciplinary creation that deserves all of its extensive touring and even if you’ve seen it before a second watch.