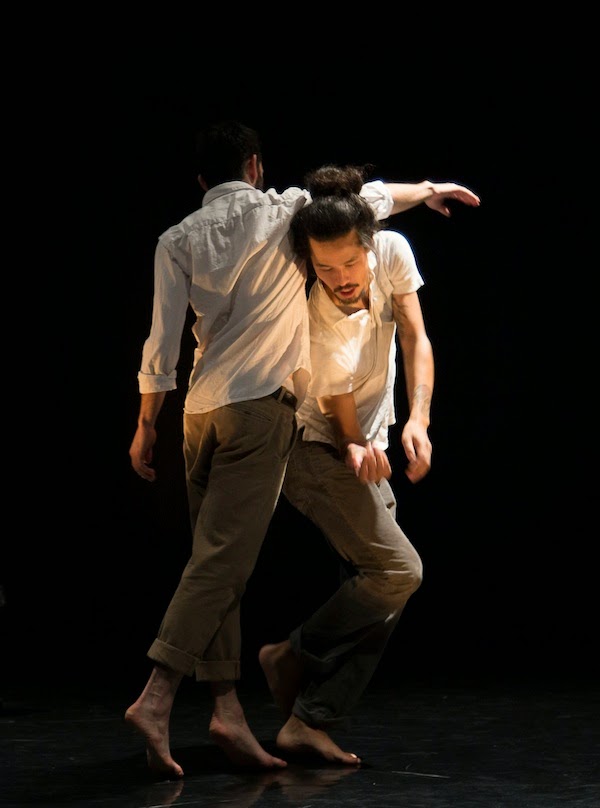 This year, Dancemakers celebrates its 40th anniversary and premieres a new collaborative work, Around. The first thing you experience before the show is the space. For this production, the arrangement of the viewing space inside the studio was very meticulously planned and executed. The audience sits in two circular rows facing the centre, with the circle being enclosed by a white curtain on a track.

Sitting in the round forces an awareness of space and the proximity of people near and far from you, performers and audience members alike. It creates a strong feeling of intimacy, which in turn creates a tension that is only increased when the performance begins. I became incredibly conscious that I could be watched.

Around consists of 10 dancers, half of them Dancemakers Company members, and the other half members of the Emerging Dance Artist Project. The piece is a combination of group scenes, solos, duets, and trios. The opening section is simple and intriguing. The dancers enter and encounter each other in the circle. They take their time to make eye contact and acknowledge each other. This is a common workshop exercise in theatre that audiences rarely get to see. Even though it is still and silent, I enjoy watching performers truly take in their surroundings. It becomes more about human connection than just putting on a show.

At the centre of the circle are two microphones. Amplification of the sound of movement is heavily explored throughout the piece. What does it sound like when we move through air or make physical contact with another person? The quiet and still moments with lingering echoes of microphone feedback create an eerie atmosphere.

The performers wear all white costumes in varying silhouettes, which actually serves the piece very well. There is not a single moment of synchronicity or unified group movement. The all white costumes, designed by Vanessa Fischer, create a polished finessed look to the show. Every dancer showcases their own individual way of moving. There are some standout solo performances from Benjamin Kamino and Ellen Furey.

It is easier to think about what the term ‘Around’ looks like, than what it triggers for one emotionally. At Dancemakers, I became hyper aware of the people around me, which made me feel uneasy of being seen and heard by others. This sounds negative but I admire and appreciate the almost instant shift of emotion. For some it may have been comforting to be surrounded and not alone. The possibilities are beautiful.

March 26 - April 6
Read also a first-person piece about Around by choreographer Michael Trent
Posted by THE CHARLEBOIS POST at 5:25 PM