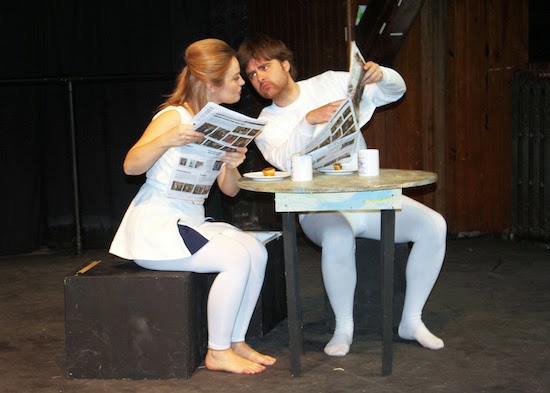 A Gamble and A Win
by Keely Kwok

Alumnae Theatre’s New Ideas Festival has definitely earned its name. With four short plays in the span of two hours, it’s always a gamble in terms of what you’re going to see. Thankfully, this festival is a win for its creativity and ingenuity.

The first show Airport Tale, written by Carol Libman is a cute scenario of two strangers meeting at an airport and how they influence one another. With great characters like the sassy Evalina Applegee played by Jane Carnwath and the bumbling Roger Robinson played by Andy Perun, Airport Tale is a fun way to kick off the night.


Would You Do It Again, written by Rebecca Grace, is an interesting look at a marriage 20 years down the road where both parties have made mistakes and forgotten why it was they got together in the first place. The piece plays with the idea of memory, with a loony doctor offering to perform the procedure of memory adjustment on one’s husband. The show is a little convoluted as it’s not always clear when the actors are breaking the fourth wall or if they’ve jumped back into the scene. Nevertheless, Would You Do It Again is a great concept to see play out on stage and one I’m sure many couples contemplate!

Simprov written by Laurence Klavan is a clever commentary on how people interact in the future (or even today for that matter) while battling the easy escape into simulated reality. On top of being a cool concept, this 15-minute show is quirky and full of laughs while underlined with the sweet sadness of some people’s desire for numbness.

Though I enjoyed all four, the one that I think deserves the loudest shout out is Pit Sublime written by Alexandra Watt Simpson and performed by the energetic and incredibly charismatic Rebecca Liddiard and Andrew Guance. For the most part, Liddiard’s character, The Queen of Garbage, speaks only in rhymes and desperately tries to push away Guance’s character Felix’s romantic advances. The Queen does so because she is on the run from a past that she’d rather not remember. Simpson has brilliantly written a succinct story with unique characters, compelling dialogue, and a jarring juxtaposition that works beautifully. Liddiard and Guance both hit each emotion precisely where they should and deliver hilarious physical performances as well. With a creative set and great use of lighting, this is definitely a show you don’t want to miss.