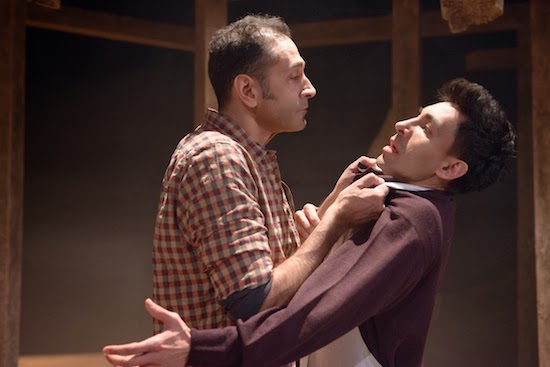 The Wanderers follows an Afghan family’s journey through the years as they flee from war, grapple with a new life in Canada - as well as their relationships with one another - and are haunted by a mysterious and inexplicable presence that brings to the foreground all the sorrow and devastation they thought they had left behind.

The family’s story consists of five parts: three interactions sandwiched between two monologues that span over nearly 40 years. Now, I will be the first to admit that I am not a huge fan of monologues. I do however have a newfound admiration for the brilliant actresses who delivered them. Like the beautifully bold Dalal Badr who plays young Miriam on the eve of her 14th birthday as she desperately tries to save herself from The Wanderers. Badr is mesmerizing on stage. As Miriam, she has this twinkle in her eye like she knows something you don’t. And she’ll give you a hint but you have to figure the rest out for yourself. In Part Two, Badr also plays another 14-year-old girl named Alice who has CIPA, a condition where you cannot feel pain, heat, cold, or any other nerve related sensation. Same age. Same actress. Entirely new performance. Where Miriam was bold and forthcoming, Badr plays Alice with heartbreaking despair and desolation. Likewise the character of Marie, played by Melanie Janzen, closes the show and emotionally bears all in a performance that can only be described as monstrous. And I mean that in the best way possible. Janzen is an I-am-woman-hear-me-roar actress who demands your attention with her ferocity. Oh and she’s an absolute riot with great comedic timing.


Because it’s a small cast of just four actors, most play multiple roles. One such actor is Omar Alex Khan who makes his Toronto stage debut in The Wanderers. Khan is incredibly honest and grounded. He plays opposite Kawa Ada in a climactic reconciliation between father and son where Ada’s character Roshan literally bears all in order to heal. The father and son have a fascinating dynamic as they struggle for power, blame, regret, and understanding. So much so that it is impossible not to become enthralled. Ada is, simply put, phenomenal. He has great comedic timing, and can switch on a dime from hunter to hunted.

Playwright Kawa Ada and director Nina Lee Aquino are a dynamic duo. Aquino is so purposeful in her direction. She understands how to enrapture an audience naturally and plays to the strengths of the script (of which The Wanderers has many) rather than using gimmicks. The minimalist nature of the show in combination with the set that keeps on giving, allows for a smooth transition through time. And a huge shout out to Camellia Koo for constructing possibly the coolest set I have ever seen.

The Wanderers is wildly ambitious. Not only does it take on issues of post-war trauma, race, and sexuality, it also seamlessly weaves the fantastical in with the reality of the story. And all the while deconstructs these themes through a spectrum of human emotions, making them tangible, and giving the audience a previously untold glance into the Afghan-Canadian perspective. Kawa Ada has written a play that demonstrates the power and vulnerability of language, a representation of the post-war psyche, and how submitting to one’s desires can cause a ripple effect with unforeseen and unimaginable outcomes.