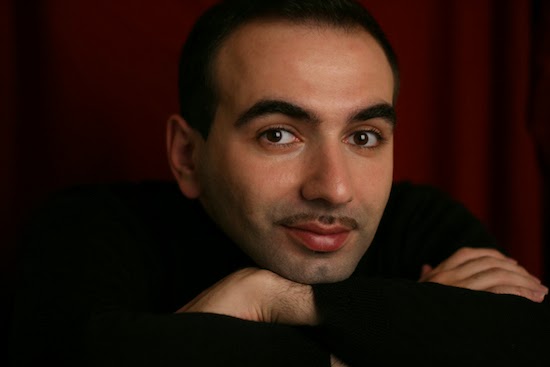 Performing Half-Blind: Staging The ... Musician. An Étude
by Art Babayants

In March 2011, I approached the novella The Blind Musician by the noted Russian writer Vladimir Korolenko (1853-1921) in an attempt to transform it into a stage production. Korolenko's novella is full of powerful descriptions of how a congenitally blind boy experiences the world, encounters people, nature and especially music. The boy goes through a significant amount of suffering before he learns to overcome his fears and embrace his love of music, eventually becoming a professional pianist admired in his home city and nationwide.
The novella is almost devoid of dialogue which made its transition into a play   extremely difficult. Upon discussion with my text dramaturge, we decided to preserve the original text without adding any new lines of dialogue. We did this to stay faithful to the spirit and style of the novel and give the audience a flavour of Korolenko’s style of writing. However, the little dialogue that did appear in the text was not enough to make the story comprehensible for the audience, so we incorporated excerpts of Korolenko’s descriptive narrative into the dramatic text. 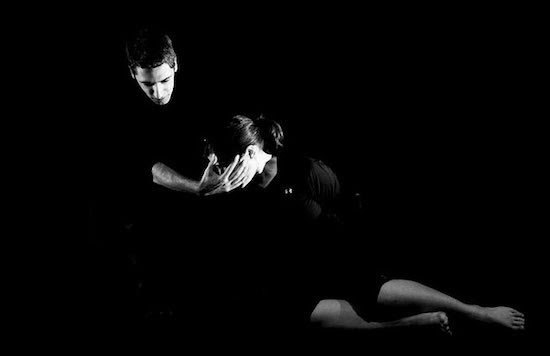 We had to find a way to counterbalance Korolenko’s lengthy narratives with a lively and compelling staging. Certain sections of the novella containing descriptions of the Musician’s suffering were turned into movement sequences accompanied by live classical piano music. At the same time I conceived the notion of ‘blinding’ the audience by significantly reducing the visual input in the show while at the same time increasing the audiences’ auditory awareness.
Audience visibility was reduced through the employment of extremely narrow focused beams of white light produced by side lighting instruments (Lekos with very small gobos) hidden in downstage wings. The rich soundscape included a complex combination of live piano music and actors’ voices. In all dialogue scenes the actors’ faces and bodies were made invisible while the side spotlights were focused only the actors’ hands or feet. This effect of eliminating the most common visual signs of communication (e.g., eye contact, lip movement, facial expressions, head nods and turns) in conjunction with specially arranged live piano music would echo the blind musician's experience.
I discovered that the conceptual staging I had in mind would create a very complicated performance environment that would be particularly challenging for actors’ proprioception, i.e., their “sense of balance, position and muscular tension provided by receptors in muscles, joints, tendons, and the inner ear” (Leder 1990: 39). We needed to find a new language and performance style to answer the needs of the production.
We rehearsed for several months before staging a workshop production at the Graduate Centre for Drama, Theatre, and Performance Art at the University of Toronto. Our first rehearsals took place in a pitch black room, where my actors’ gestures were lit only by narrowly focused flashlights. Further explorations on an actual stage with two narrowly focused lighting instruments directed only at the performers’ hands showed that the actors, both trained performers with substantive professional experience in theatre, were mostly incapable of adapting to the new performing conditions.
It took a bit of research to realize that I encountered the same problem that Konstantin Stanislavsky himself came across when he was staging Knut Hamsun’ The Drama of Life with his First Studio:
The problem was clear: by directing only the heads and hands of the actors, to the practical exclusion of any other moving part of their bodies, Stanislavski and Suler had [limited] the actors from expressing their true and natural feelings; little wonder that spectators [were] left unaffected and confused. (Gordon 1987, 35).
It became clear to me that the actors would not be able to perform the piece without a rehearsal process that would include a training regimen that would develop the proprioceptive patterns necessary for performing within the unique staging conventions of the play. Eventually, the idea of a practice-led research project was born and my initial research questions shaped up. Here is how they were formulated in May 2011 – long before the I started working on the full scale production of The … Musician:
The research study that will accompany the production process of The ... Musician will focus on the actors' phenomenological experience of performing through voice and gestures. The following questions will be at the core of the study: How will the actors cope with the challenges presented by the new mode performing? 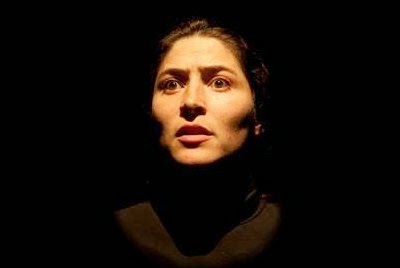 The new exercises proved challenging, but were successful in assisting the performers to develop a whole new set of skills and abilities. At times the experimentation was counter-intuitive to the conservative trained actors, who expended great energy to acquire the new techniques. As one actor, Clayton Gray admitted, “I have never worked so hard on a show”.  Performers resuming their roles in the full production of The ... Musician. An Étude. in January 2014, will be provided an opportunity to build on the skills they developed through months of work in the workshop process. The performers who have been newly added to the roster of the show will be given the chance to experiment with an innovative and unique performance method guaranteed to expand their skill set.
Audiences can judge for themselves how successfully the performers have adapted to the challenging performance conditions by attending the show! The ... Musician. An Étude. plays at Dancemakers Centre for Creation in Toronto’s historic distillery district from January 11-26, 2014. For full details visit www.torontolab.org


Leder, Drew, 1990. The Absent Body. Chicago: University of Chicago Press.
Posted by THE CHARLEBOIS POST at 12:01 AM