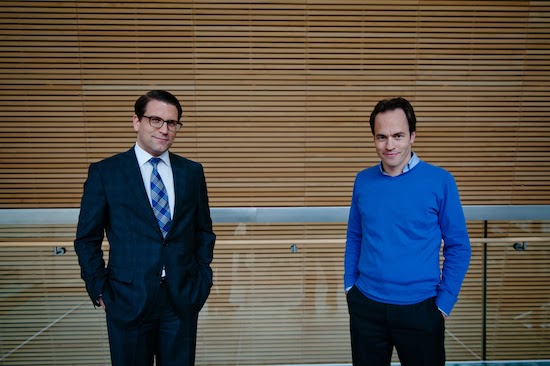 I was privileged to be at the Four Seasons Centre last night to attend the unveiling of the Canadian Opera Company’s 2014-2015 season, as discussed by COC General Director Alexander Neef and Music Director Johannes Debus.  It is being marketed as an all-Canadian season: three operas will be returning COC productions, and three are new co-productions. This Fall marks the reduction of the COC’s season from seven to six productions: two operas in the Fall, two in the Winter, and two (rather than three) in the Spring.


The Fall run will feature two favourite operas: Verdi’s Falstaff and Puccini’s Madama Butterfly.  Falstaff is a new co-production with the Royal Opera House Covent Garden, Teatro alla Scala, Metropolitan Opera, and Netherlands Opera, directed by Robert Carsen, conducted by Debus, and starring the wonderful Gerald Finley in the titular role.  This production is set in 1950s England, and promises to be a delight.  Madama Butterfly will feature the premiere of Patricia Racette as Cio-Cio San, and will be directed by Brian Macdonald and conducted by Patrick Lange.  This is a remount of the COC’s own production.

The Winter run features Mozart’s Don Giovanni and Wagner’s Die Walküre.  Don Giovanni is a new co-production with Festival d’Aix-en-Provence, Bolshoi Theatre, and Teatro Real Madrid, conducted by Michael Hofstetter, and directed by Dmitri Tcherniakov.  Russell Braun will star as Don Giovanni, and came onstage to discuss Tcherniakov’s direction, which promises to be an intense portrayal of this work.  Die Walküre, conducted by Debus and directed by Atom Egoyan (who, incidentally, is directing the COC’s production of Cosi fan Tutte that opens this Saturday).  A remount of the 2006 COC production, it will star the Grammy-winning soprano Christine Goerke as Brünnhilde.

Finally, the spring season will feature Rossini’s Barber of Seville and a double-bill of Bartόk’s Bluebeard’s Castle and Schoenberg’s Erwartung.  Barber is a new co-production with Houston Grand Opera, Opéra National de Bordeaux, and Opera Australia.  Conducted by Rory Macdonald and directed by Joan Font, it will star Joshua Hopkins (described as ‘the next great Canadian baritone’ by Neef) as Figaro.  This production will also serve as the COC Ensemble Studio’s main performance on May 15, 2015.  Bluebeard’s Castle will star John Relyea and Ekaterina Gubanova, and Erwartung will star Krisztina Szabό; both operas will be conducted by Debus and directed by Robert Lepage.  This COC production has not yet been performed in the new opera house, though it has travelled around the world since it was first performed in the O’Keefe Centre.

There has been some complaint that this new season is playing it safe in terms of its programming, and that the COC should be commissioning more new operas, as well as new productions.  That said, this is an exciting new season, and the opera houses co-producing the three new productions speak to the quality of the COC’s output.  The singers the COC has engaged for the season are among the best around, and feature some of Canada’s best established and new talent.  I will admit that I’ve never been terribly fond of the two operas being produced in the Winter, but after hearing the introductions for both productions, I’m going to fit them into my calendar.  If you have never before been to the opera, I might suggest The Barber of Seville and Madama Butterfly; both have enough familiarity from popular culture that you won’t feel quite so overwhelmed.  That said, I’m a sucker for early Twentieth-Century music, and I can’t wait to see Bluebeard’s Castle and Erwartung.


I’ve never had a subscription to the opera; I’ve always preferred to pick and choose the performances that most appeal to me without being tied down to a pre-set schedule.  After last night’s event, however, I am reconsidering that practice.
Posted by THE CHARLEBOIS POST at 4:54 PM