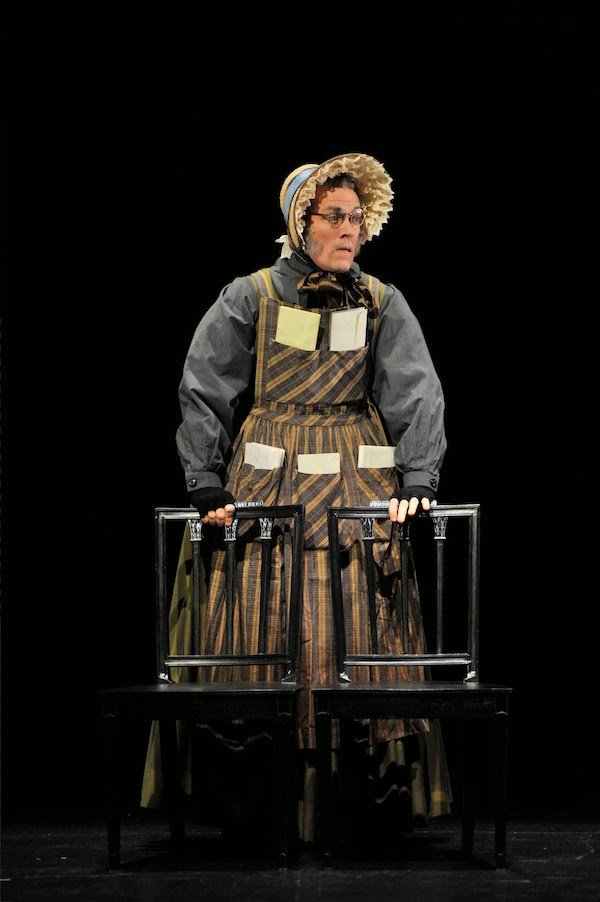 Gordon Tanner (photo by Bruce Monk)
Up in the Eyre
A novel and a play are two different things.
by Edgar Governo
@pseudohistorian

It can be intimidating to stage a new interpretation of an oft-adapted work.

Charlotte Brontës novel has been expanded upon and retold countless times since it was first published in 1847. On film alone, Jane Eyre has been tackled by everyone from Aldous Huxley to Franco Zeffirelli, with many acclaimed actors portraying both the fiercely independent Jane (Joan Fontaine, Susannah York, Charlotte Gainsbourg, Samantha Morton) and her love interest Edward Rochester (Orson Welles, George C Scott, William Hurt, Michael Fassbender), making one's own approach a daunting task.

As she explains in her notes for the programme, playwright Julie Beckman has chosen to face this challenge through Chamber Theatre--a form which emphasizes using as much of the original text in the adaptation as possible, often through explicit narration by the characters onstage. Beckman's stated goal is "to embrace the storytelling experience, to allow us to step into Jane's world," but this style has exactly the opposite effect, constantly taking the audience out of the story just as the characters are starting to feel like real people.


Most of the narration provided in this production at the Royal Manitoba Theatre Centre comes across as redundant, fundamentally missing the point of why a novel would be adapted for the stage in the first place. It is unnecessary to have a character like Mr Brocklehurst (Gordon Tanner) proclaim that he "slowly turned his head" as we see him doing so, nor for Mrs Fairfax (Miriam Smith) to describe bringing in coffee as she does just that in front of us, and while this might technically achieve the goals of Chamber Theatre in a formal sense, it completely fails to engage the audience at an emotional level. There is a place for this kind of narrative description when it comes to Jane's internal monologue, since the story is told from her perspective and depends so much on her inner thoughts and feelings, and the play succeeds most in those moments when it restricts itself to telling us what it hasn't already shown.

Tracey Flye's direction also seems unable to decide on a tone for the play, with various members of the cast often feeling like they are in two different versions of Jane Eyre. Jane herself (Jennifer Dzialoszynski) maintains a serious demeanour throughout, showing the same resolve displayed by Scarlett O'Hara in last season's Gone with the Wind (which I also reviewed for this site, and which included several of the same cast and crew), as does Rochester (Tim Campbell), and the two achieve an effective chemistry together when they aren't busy telling us they have taken each other's hands and looked into each other's eyes. However, many of the minor characters act as if they are in more of a pantomime, playing up the less naturalistic elements to a comedic effect I wasn't sure was originally intended. When Gordon Tanner and Jeremy Walmsley lift Rochester up on their shoulders to play his horse, I am sympathetic to that choice for portraying an animal onstage--I can still recall the fake mechanical rats being used in RMTC's production of Dracula, to evoke one alternative--but by the time Tanner reappears in hastily-costumed drag to play a postmistress, I start expecting the members of Monty Python or SCTV to show up.

Using the most famous phrase from the novel ("Reader, I married him") without alteration or context in the play's final scene is a microcosm of its problems. There is no effort in this production to build any conceit that Jane is writing about the events in her life (even though the novel was first published as "An Autobiography"), so addressing a "Reader" comes across as jarring instead of an homage to a classic line, serving only to remind me that I could just be reading the book instead.