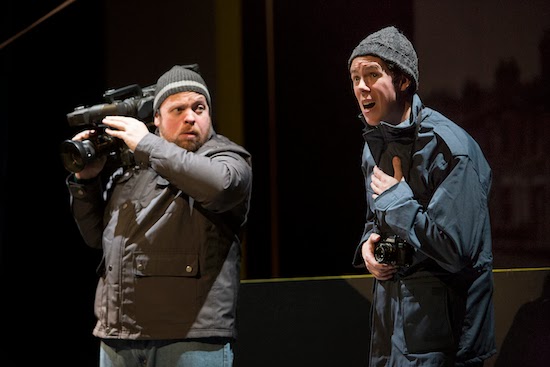 The story of a community rocked by the serial killing of five prostitutes seems odd fodder for a musical, but a musical it is. And a rather pretty one at that. Canadian Stage has created a new production for London Road’s North American premiere, after a successful 2011 run at the National Theatre in the UK.

This production is one that confounds. The story is deftly handled by playwright Alecky Blythe, with music by Adam Cork. This isn’t the story of the murders, but the story of the residents of London Road, where serial killer Steve Wright lived during his crime spree. We never meet Wright, nor his victims. The script orbits around the events taking place leading up to Wright’s arrest and beyond, through the lens of the other victims of London Road, victims just by dint of living there. In writing the play, Blythe interviewed the residents, and then transferred their words verbatim into a script. Cork then listened to these same recordings and wrote music to match, a challenge considering the necessary preservation of the rhythm of the speakers on the tapes, and the desire to preserve the timbre and pitch of the speakers as well.


The result is a very rich, very textured musical. It immediately catches one off guard, with rhythmic structures that seem perfectly natural in speech but markedly out of place in music. The cast executes this incredibly complex music without making it seem difficult in any way, and they all deserve applause for the dedication that this production requires. No one can be named here, as characters are not identified, and the cast as a total portrays more than 50 characters amongst them. Musical director and conductor Reza Jacobs masterfully keeps the orchestra and performers tightly coordinated. The direction of Jackie Maxwell is excellent as well, effectively using every bit of space in the telling of this story. The design, by Judith Bowden, is simple and effective.

There is a lot of excellent in this show, but this is a rare case where excellent + excellent does not equal excellence. Each of the components of the show is excellent on its own – the layered and textured score, the whip-sharp performances, the direction, and the design. What keeps this production from excellence is a sameness that runs throughout it, particularly in the music. Each and every song follows a formula, which becomes readily apparent midway through the first act. Cork’s score allows for just enough deviation of musical styles to stave off boredom, but the sameness is still there. Perhaps the thing that hurts this musical the most is the repetition present in the songs. A song that consists of five minutes of the cast singing the same words over and over about the conviction of Wright was trying, and this happens in almost every song. Unfortunately, this production feels like an exercise about verbatim script technique that has been stretched out into a too-long production.

Productions like these are a particular challenge to write about. As I’ve mentioned, there is a great deal of excellent work in this show, and I am hard pressed to find something to pin-point as problematic. London Road is interesting from a mechanical and technical perspective, but it felt much like enjoying a fine work of art in a museum, and then realizing I was enjoying it for the brushstrokes. It is an exercise in incredible intricacy and complexity – but that is all.