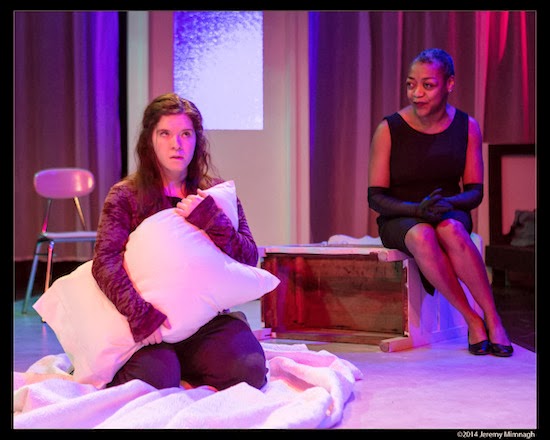 Why?
by Jason Booker
Partway through the English language premiere of Wadji Mouawad’s Pacamambo, after having heard the young protagonist and her grandmother speak in rapturous tones about “the road to Pacamambo” for what felt like the tenth or twelfth time, it occurred to me that this was not a piece of theatre set before the audience. It was a travel pitch for a place where people ignore racial lines to become one, escaping into some hippy-dippy heaven, that sounded so much more appealing than the seats in these cramped quarters. And when the seating is set up as a runway – half the audience facing the other with actors wedged into a narrow space in between – it became apparent there were a few audience members with similar thoughts.
Welcome to the Canadian Rep Theatre, founded in the fallout of Ken Gass’s firing from Factory Theatre. This is their inauspicious debut.


Playwright Mouawad writes beautifully poetic text that sometimes rambles a bit but that needs a vision, full of theatrical magic and connection between the actors to simply tell the story – whether to each other or to the audience directly. Possibly this theatre-for-young-audiences script, Pacamambo, simply isn’t his best, however it is loaded with whimsy, including a notable performance by Michelle Polak as a dog, Mouawad tries climbing inside the head of young Julie (Amy Keating) to explain how death works in mysterious ways. When The Moon slips through the window late one night to steal away her grandmother’s soul, Julie loses someone she loves too much. The potential is here for a production that directly speaks to an audience in such an intimate space as Julie and her dog, Growl, linger by the corpse of her grandmother for two weeks, waiting for Death to appear and answer a few questions.
However, instead, the show concerns itself with a dramatic frame that involves a doctor trying to get reluctant Julie to explain her actions months later: the Psychiatrist, played by the usually wonderful Karen Robinson, who takes on the least professional and most motherly methods possible. This doctor pleads with her patient when she needs to be firm. But why couldn’t Julie have spoken directly to an audience, rather than always being in profile, rattling on to a doctor who stands gaping at the door? And why does she open herself up so completely after her reluctant protests for the first few minutes, which are mentioned as having occurred since the incident.
Ultimately, the problem with Pacamambo here is that the script becomes mired in an ill-conceived naturalistic production by director Ken Gass. While the lighting is beautiful and evocative, the set is minimalistic and dull and the costumes, well, why go there? Really, the only notable one involved a little black dress, which is actually one of the night’s highlights.
But the tone of the piece is wrong from the beginning when the cast sits onstage in an overly loud, atmospheric soundscape by Wayne Kelso that crushes the soul and mutes any conversation pre-show. That leads into a minute-long dumb show of musical chairs between Julie and the doctor before a shouted first line. What just transpired? Who knows.
Gass doesn’t trust his audience to connect with Julie and she becomes a stereotype of how a young woman (who knows what age since her character’s knowledge and appearance and actions are completely at odds with one another) should act. The normally powerful Keating actually feels like the weakest link in this cast, playing a one-note fierce, needy and internalized child instead of connecting with anyone else onstage or in the audience. Julie only works as a character if the audience can be charmed into thinking that her bizarre behaviour makes sense, if it comes from a place of love and concern for her dead grandmother. Even Hannibal Lecter knows that psychotic behaviour needs to be sold to an audience, not simply narrated impassively.
The physical movement pieces are outstanding, involving Growl (Polak) and Marie Marie, played by Kyra Harper as a rigid corpse for more than half the show, and contain some of the only moments when Gass demonstrates he sort of understands this overly long (and it’s only 65 minutes) unnecessary show.
And why choose this specific show – one meant for youth even, or this time or this space to debut a new company in the crowded theatrical landscape of Toronto? That remains the biggest mystery of the afterlife... I mean, Pacamambo.
Jan.  21 - Feb 2.
Posted by THE CHARLEBOIS POST at 5:41 PM