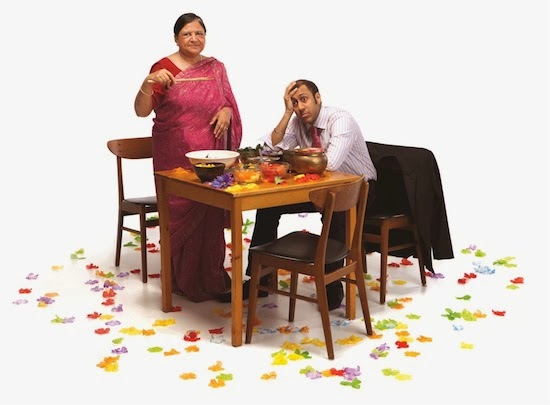 As the house lights come down, Asha Jain, an Indian woman in her sixties, kindly welcomes the audience to her home.

“Well, not really my home, but let’s pretend for today,” she says.

And yet it really does feel like we’re in the Jain family home. Asha isn’t a trained actress, but rather the mother of Ravi Jain, an actor and director. The two of them created A Brimful of Asha and perform it together. As themselves, they tell the story of a dispute they had seven years ago – a cultural clash between Asha, raised in India, and her son, born and raised in Canada.


In 2007, Ravi was an ambitious 27-year-old busily launching his career in theatre. Asha, along with Ravi’s father, thought 27 years old was about time for their son to get married. In a traditional arranged marriage, of course, despite Ravi’s protests.

The story finds Ravi on a trip to India with a Canadian friend, when his parents decide to travel to India at the same time, and proceed to wreak havoc on Ravi’s trip by setting up meetings with nice Indian girls, their fathers, and half their extended families.

A Brimful of Asha sheds light into how an Indo-Canadian family navigates cultural clashes between the older generation from India and the younger generation raised abroad, by presenting both Ravi’s viewpoint, and Asha’s viewpoint. It’s easy to sympathize not only with Ravi, who’s terrified of marrying someone he just met, but also with his mother, who is stuck between two cultures. She cannot simply ignore all her Indian relatives who expect her to get her son married while he’s young.

The creators succeed at helping the audience understand both Ravi and Asha’s points of view and how they experience different sides of a mother-son conflict that’s both a classic immigrant experience yet also unique in its own ways.

The hapless Ravi and opinionated Asha have the audience laughing throughout the evening. Despite saying that she’s “not an actor,” Asha is very funny onstage as she wittily butts into everything Ravi’s saying with her own take on the matter. Her storytelling does drag at times, as she’s not as animated as Ravi, but the dialogue between the two is always very natural and engaging.

True to PuSh festival form, A Brimful of Asha is a young play that’s unlike any production I’ve ever seen. It’s a relatively simple production, but performed in a highly original fashion. It’s quirky, thought-provoking and absolutely charming.