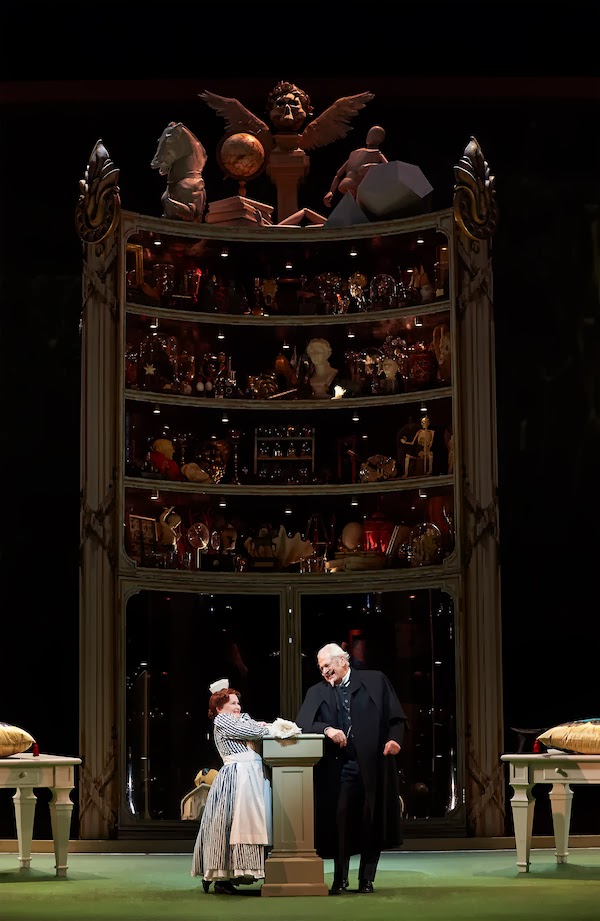 Mozart must have been hard to hang out with.  On one hand you have a musical genius and on the other you have a guy, who by modern standards would have had a fraternity sense of humour.  Still beyond his shenanigans and through his lighter works emerges a dark image of humanity where the illusion of individuality gives way to uniformity of human behaviour where all individuals are beholden to their base instincts.  This piece contains all of the above.

In Così Fan Tutte this notion emerges through the relationship of two couples Ferrando (Paul Appleby) and Dorabella (Wallis Giunta), and Guglielmo (Robert Gleadow) and Fiordiligi (Layla Claire).  Ferrando and Guglielmo challenge an indecent proposal from their friend Don Alfonso (Sir Thomas Allen) that all women are incapable of being faithful despite their oaths of allegiance and that given enough time and pressure all will submit to seduction.

Director Atom Egoyan has taken a slight spin away from the original fatalism versus individual freedom interpretation of Cosi Fan Tutte (everyone does things that way regardless of their will), and substitutes it for a more sexual liberating one where everybody is doing it (Mozart would have been proud).  To do this he has set our protagonists in a school dedicated to the art of seduction and transformed Don Alfonso from a philosopher to a professor.  In addition, Mr. Egoyan provides a motif of several different butterflies pinned and preserved and the image of Frida Kahlo’s Two Frida’s to illustrate that love is an ephemeral emotion that can cut the heart with surgical precision.  It is a very impressive imagery that sears into your consciousness. 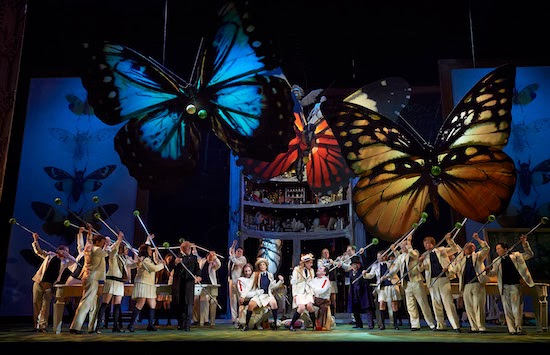 This imagery only worked because of the brilliance of Set and Costume Designer Debra Hanson.  When the curtain opened to reveal the school setting the crowd literally gasped with delight and applauded a short while then stopped for fear of interrupting the beautiful voice of Ferrando. Ms. Hanson’s sets are imaginative, consistent with Mr. Egoyan’s interpretation and a visual delight. For instance at one point in the second act the school goes on a field trip to collect butterflies and the set has several brilliantly illuminated butterflies in the foreground while in the background is a watermark of a dandelion being blown by the wind.  The costumes are reminiscent of a 19th century Prussian prep school and provide depth to the school motif that Mr. Egoyan wants to hammer home.

Conductor, Johannes Debus, seemed to have been told to lead the orchestra strictly in an accompanying role, and may have been following the old adage that an orchestra is better seen and not heard in a Mozart production.  Like many of Mozart’s pieces the music seems to be written merely as accompaniment.

However, every performer was outstanding, from the amazing vocal talents of all six protagonists to the comedic depth of Fiordiligi (Layla Claire) and her sister Dorabella (Wallis Giunta). Their take on the sisters as proper long-shiny-hair-down preppy teenagers flirting with all the seriousness and the silliness of their young age seems so real, yet it is so much fun to watch.

The only problem with the show is its length. At some point it seemed to have adopted poet James Fenton's adage on opera, "It's not taxing to the listener's intelligence because if you haven't heard it the first time round, it'll come around again." At least the points were hammered home through outstanding voices, wonderful acting, and visual delights.

If you do not trust your partner, like to laugh, love to have audio honey poured down your ears then I recommend this show to you.