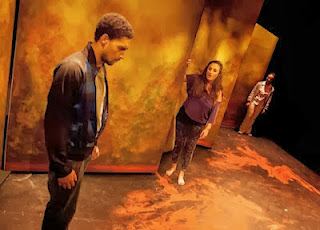 The Charlebois Post, ltd. is very proud to announce the winners of the CharPR Prize for theatre public relations for 2013. However, before we get to that we must restate our profound thanks to all the publicists, photographers and PR departments across the country without whom we would have very little to share with our readers. Here's to a brilliant 2014. (In passing, if you would like to see our Picture of the Year, come back tomorrow!)

[Winners are in boldface]
Best Photographers:
Dahlia Katz
David Hou
David Cooper
If the photo is from a company in the west, if it is striking (and very often breath-taking) we very rarely have to look at the credit: it will be a piece by David Cooper. It will be that perfect combination of story-telling and esthetics. He is, as are our two other nominees, greatly responsible for making performing arts photography a stand-alone art.

Best PR - Indie (no fixed venue):
Obsidian Theatre (Toronto)
WYRD Productions (Toronto)
Against the Grain Theatre (Toronto)
*[AtG will receive a photo link from our site to theirs for the two weeks prior to their next production and during its entire run. The link will appear on every page of the site, at the top corner of the page.]
Second-time winner in this category, AtG could give lessons on the art of PR in small companies. (Hell, they could teach many, many valuable lessons to most companies.) They truly know how to use social networks, they always have striking preview images, they are broadening into video and despite the relatively small reach of the online press, AtG is incredibly available to them, reaching (as is another CharPR-winning opera company) a new public. We could go on for pages on what sets AtG apart, but - as we said - they should be giving lessons.

Best PR - Small:
Montreal Fringe Festival (Montreal)
ATP (Calgary)
Pacific Theatre (Vancouver)
We chose Pacific Theatre because it is a small company, a quarter of the way around the world, which deals with us here in Montreal and our people on the ground in Vancouver like they were just down the block. They are accessible, and, like the other winners here, we can propose coverage outside of opening night reviews and they are open to it without question. In this way, this company has made itself part of the national theatre dialogue. They are not way out west - they are here, in this place, participating in the conversation that is Canadian theatre.

Best PR - Medium (multiple venues and mainstage of 400 seats+):
Arts Club Theatre (Vancouver)
Royal Manitoba Theatre Centre (Winnipeg)
Segal Centre (Montreal)
Media outlets will tell you that not only is the Segal Centre's PR top of the line, but if one was going to give such an award, the most improved as well. While many other companies continue to deliver same old, same old (like the rules have not completely changed) the Segal has grabbed onto social networks (especially YouTube) with a vengeance and info and images are generous and well-disseminated. In the Montreal bilingual theatre landscape, they are quite unique for their grasp of how things are now done...and should be done.

Best PR - Large (mainstage 800+ seats):
Opéra de Montréal (Montreal)
Stratford Festival (Stratford)
Canadian Opera Company (Toronto)
Simply the best. Yes, it is probably a huge machine but you never get the sense of that (especially if you are a smaller online medium) because COC has a personality in the best sense of the word. They provide access to artists, indeed you always feel that the artists are eager to share the message of the company. If AtG could teach the big lessons of great PR, then COC probably wrote the course notes. As with AtG boss Joel Ivany, it is crucial to the COC's PR operation that boss Alexander Neef is also on the social networks giving everything a real face and tone.

Best PR - Single Production
Though the publicist for Dirty Butterfly was Sue Edworthy, the company in its entirety assured the totality of the show's PR by being present in every aspect of it: social networking, photos, interviews, and explaining to press and audience what was a particularly prickly product.

Lifetime Achievement
Michael Cooper - perhaps one of the greatest performing arts photographers in the world, and certainly among a handful of the finest in Canada - seems to have a policy of never letting a flawed photo be seen. Whether it is dance, opera or theatre, his photos are almost always museum-worthy. Completely apart from his gorgeous more intimate solo- or duet-shots, Mr. Cooper is also a master in that most difficult of things: the ensemble shot which does not look staged. His understanding of the material he is photographing doesn't just feel informed - it suggests an utter complicity with all the artists of the production including the director.
Posted by THE CHARLEBOIS POST at 12:02 AM