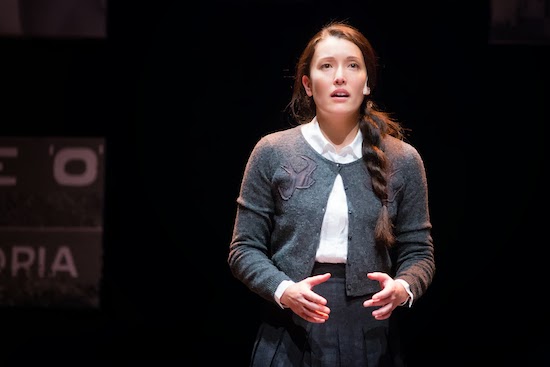 Last night, I had the honour of seeing Joel Bernbaum's Home is a Beautiful Word (directed by Michael Shamata) performed at the Belfry Theatre. I was glued to my seat, riveted by the honesty and emotion that was portrayed onstage, and I felt privileged to be a part of the mind-expanding performance that took place.  But let me back up a second.

Homelessness is a big topic, and a sensitive one. There are such a wide range of emotions that people experience when reflecting back on their encounters with those that are homeless. There are a lot of misconceptions, a lot of prejudices, a lot of anger, and a lot of sadness swirling around the issues. Joel Bernbaum conducted over 500 interviews with Victoria's homeless, and the result is an eye-opening piece of verbatim theatre that shines a light on the thoughts, feelings and experiences of the interviewees. And by verbatim, I mean every um, every sniff of a tear held back, every curse word and every stutter were faithfully transcribed and beautifully performed by the five talented actors onstage. Each interviewee's interview started with two open-ended questions: "Homelessness is…?" and "Home is."


It was an amazing experience to hear the points of view and stories of such a varied set of people from within my own community. All names have been changed (though many participants did not have an issue with their names being used), but those of us who have met a number of homeless people recognize some of the participants from their testimonies.

What was best about this piece for me was the fact that it made me think. It doesn't focus on criticizing the way 'the system' has failed people (although in ways it does, like any overwhelmed social service system has the tendency to do), but on the feelings of the affected people. It also plants the seed that, collectively, we need to increase our humanity, and that one-on-one actions matter. We, as a society, may never fix 'the system', but that doesn't mean there isn't a difference that can be made with the efforts of the individual. We all have to play in this sandbox together.

You may have noticed I haven't said much about the specifics of the play; honestly, it was so well-done and pitch-perfect that I didn't notice much that specifically stood out. It was all well-crafted, from the flawless acting to the intriguing and beautiful set and lighting design. You have nine more days to attend this show, which I think should be mandatory viewing for the citizens of Victoria. See it sooner than later; you won't regret it, and your sense of humanity may grow three sizes.

January 7-19 at the Belfry Theatre

Run Time ~120 minutes with one intermission
Read also an interview with playwright Joel Bernbaum
Posted by THE CHARLEBOIS POST at 7:09 PM