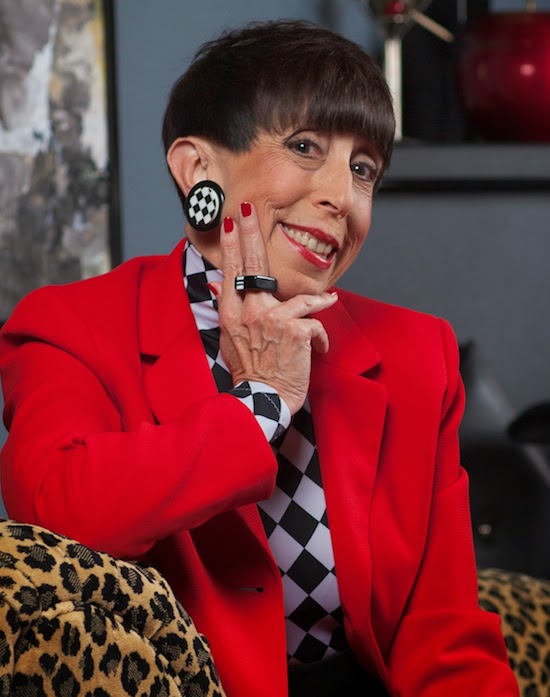 Edith Head and Me!
We can honestly say that A Conversation with Edith is based upon the words and thoughts of Edith Head - the 'Edith-isms'.
by Susan Claassen

Susan Claassen is celebrating her 34th anniversary with the Invisible Theatre (IT) and has been  a resident of Tucson since 1972. As Managing Artistic Director, she has produced more than 350 productions and directed more than 50. Susan Claassen has been a member of Actors Equity Association (the professional actors’ union) since 1969. Some of her most memorable roles have been Bella in Lost In Yonkers,  Alice B. Toklas in Gertrude Stein And A Companion, Hannah in Crossing  Delancey, Shirley in Shirley Valentine and Trudy in The Search For Signs Of Intelligent  Life In The Universe. In addition to her work with the Invisible Theatre she has been a consultant and director for the Waterfront Playhouse and The Red Barn Theatre in Key West, Florida, and directed I Won't Dance at New York’s famed Rainbow and Stars Cabaret and St. Paul's prestigious Ordway Theatre. Ms Claassen is a national board member of PEOPLE FOR THE AMERICAN WAY–A Constitutional Liberties Organization. She is the recipient of the 1985 Governor’s Award for Women Who Create, the 1993 Humanitarian Torch Award for her efforts on behalf of people living with AIDS and a 1996 Distinguished Service Award from the State Federation for Exceptional Children for her commitment to arts education for special populations. Susan was the 1999 City of Hope “Spirit of Life” recipient, and performs as a clown in the Macy’s Thanksgiving Day Parade. She was recently selected as one of Tucson Lifestyle’s 10 Most Admired Women and one of Tucson’s Ten Best People.

I first got the idea to create a theatrical presentation when I was watching a television biography. I contacted Edith' Heads estate and they granted me permission to pursue this project. I madly read anything I could find and when I came upon Paddy Calistro's book, Edith Head's Hollywood, I decided to attempt to locate its author. I called telephone information for where I thought Paddy lived, and voila, she was listed. I placed the phone call and it was kismet. At our first meeting in Los Angeles we knew the connection was right and we agreed to collaborate.

With Paddy’s connections we received the blessings of The Academy of Motion Picture Arts and Sciences. They prepared a reel of film clips of Miss Head’s appearances. I was able to study her physical traits. The way she walked, a tilt of the head, how she gestured - really, how she carried herself.  I also studied her speech patterns and rhythms.  She had been a school teacher so she had a distinct way of speaking - clipped and to the point! I work with a voice and movement coach in order to constantly perfect the details of her mannerisms and vocal qualities. My studying is ongoing.


We have worked very hard to create an intimate portrait that reveals the complexity of this fascinating woman.

Paddy had not only written the book but had inherited 13 hours of taped interviews with Edith Head - it was truly a gift from heaven. We can honestly say that A Conversation with Edith is based upon the words and thoughts of Edith Head - the 'Edith-isms'. In hearing her speak, it struck me how bright she was - and she did not suffer fools lightly. She had to keep up a strong exterior in order to mask  her vulnerability. Her longevity is a direct result of her tenacity. We have worked very hard to create an intimate portrait that reveals the complexity of this fascinating woman.

I remember seeing Edith Head on television when I was a child. I was aware of her work when I would see “Gowns by Edith Head” but I wasn’t really aware of her as a person. Some of the common misconceptions are that she lacked a sense of humour and that she was rigid. You rarely hear about her charitable efforts and her kindness and mentoring of other designers. She was extremely generous and provided many opportunities for other designers. In fact, she was one of the founders of the Costume Designers Guild and an early member of Fashion Group International (1935)

I know I'm not Edith. And the audience knows I'm not Edith Head. But there's a shared moment. Everybody can remember a film they saw, or a date they had, or the first time they saw 'Gowns by Edith Head' or the first time they saw Grace Kelly in the gorgeous gown, or Elizabeth Taylor in the A Place in the Sun dress. It brings back something that in some way touched them. And that is a connection that I just treasure.
“You are more Edith than Edith!”
Norman Lear and Barbara Rush, who both worked with Head on Come Blow Your Horn, came to see us and said. “You are more Edith than Edith!”  Jean-Pierre Dorleac, a costume designer who was one of Edith's contemporaries, came to opening night and said, "I just felt I was with my friend again." The list goes on from Joan Rivers to Anthony Powell to Tippi Hedren to Elke Summer to Kate Burton who said,”I am having an out of body experience. I used to come to your fittings “Miss Head” with my step mom!”
I am a very disciplined actor. I study the script every day. I listen to her interviews. Arrive at the theatre two hours before curtain to slowly and thoroughly get into Miss Head’s “head” - it is a wonderful time and very precious to me. I have my rituals that I go through like eating the same thing prior to every performance. It is an awesome responsibility to keep someone’s legacy alive and I embrace that wholeheartedly. I have studied her mannerisms like the way she tilted her head or posed for photos and it seems to pass the test of industry insiders!

I feel it is my responsibility to make every moment transcendent - not a reincarnation but a shared moment in time. We set the play in 1981 during the making of her last film, Carl Reiner’s “Dead Men Don’t Wear Plaid”  starring Steve Martin. She died two weeks after the wrap of the film and the film is dedicated to her. Throughout the play we see glimpses of a woman who has outlived all her contemporaries and is wrestling with a lifetime of memories and regrets. It is those vulnerable moments that resonate so deeply.

It was a boy’s club when she started - 1923.
Edith paved the way for all costume designers. Edith was an executive woman before there was such a thing! It was a boy’s club when she started - 1923. Women in the Unites Stated had just recently got  the vote, if you can imagine. It has been said that Edith had the instincts of a pastry chef and the authority of a factory foreman. She herself said,  “I knew I was not a creative design genius…I am a better diplomat than I am a designer...I was never going to be the world’s greatest costume designer, but there was no reason I could not be the smartest and most celebrated.”  She knew how to play the game better than anyone. Her concern really was to change actors into characters. Edith said,  “I make people into what they are not - 10 years older or younger, fatter or thinner, more handsome or more ridiculous, glamourous or sexy or horrible. The camera never lies, after all, so my work is really an exercise in camouflage.” She was a woman with a great heart, a great sense of humour, and great, great determination.
Every audience is notable and remarkable. From our first night in London when Dame Cleo Laine came to my student matinees - each opportunity is a blessing!

The audience response has been amazing. From Tbilisi to Edinburgh to Chicago audiences have been touched by Edith’s story. What they take with them after having seen the performance is truly dependent on what they bring to it. Film buffs get immersed in  hearing stories from someone who has lived through the evolution of contemporary film, older audiences remember always seeing the closing credits, “Gowns by Edith Head”. It evokes a bygone era  and younger audiences think of the Pixar animated film “The Incredibles” and Edna Mode, designer to the super heroes. The universal response is summed up by a note I received from a fan, "My friend saw the show on Saturday and adored it. He said the same as I do - if someone mentions Edith Head to me now, my first reaction will be to say 'Oh yes, I met her once and it was unforgettable!'"

A Conversation With Edith Head runs at Buddies in Bad Times, Jan 17 - 19
Posted by THE CHARLEBOIS POST at 12:05 PM