Review: (Toronto) The Lady's Not For Burning 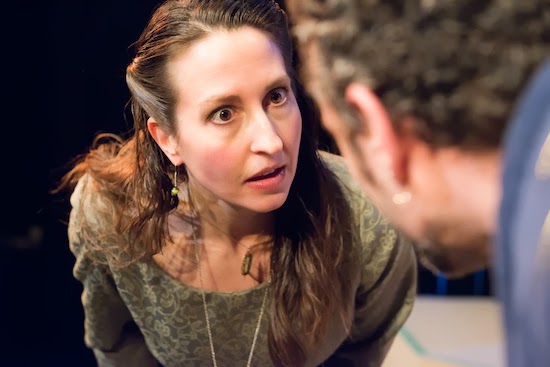 Not Old-Fashioned, Not Fluff
by Lucy Wells

Despite the strong winds last evening, I was more than pleased to make the trek out to the Alumnae Theatre to see their new production of Christopher Fry’s classic comedy. Written in 1948 but set in the year 1400, either more or less or exactly, it was so popular for a time that Margaret Thatcher’s speech-writers referenced it in one of her most famous addresses. It references Shakespearean comedy and is written in rather florid verse, but it has its own cheekily anachronistic style.

Right off the top, I really enjoyed the set.  It is an elaborate stage, on several levels, with several doors and a large window to accommodate the many entrances and exits in this very physical comedy.  Characters run in and out constantly, popping in and out of the window, hiding behind doors, jumping on the furniture, and in one case, scrubbing the floor; as this play unfolds in the same room throughout, it was nice to have a solid enough set that it could be used without wobbling!


Then we come to the text itself.  This is a wordy play, and characters go off on tangents, wax poetic, and make references galore. Director Jane Carnwath has assembled a very strong cast who can handle the verbal fireworks without losing confidence or descending into a sing-song delivery. Chris Coculuzzi (Thomas)  and Andrea Brown, (Jennet) as the lovers, clearly have a high comfort level with this style of writing, and were able to maintain the trajectory of their parts without becoming lost in the text’s many ornaments. Also notable was Peter Higginson as the Chaplain, who brought a real sweetness and wisdom to a role that could be played as merely a buffoon.

Actually, that was probably my favourite part of the play overall. Each role is basically a stock character with some variation; this play is written to a classic comedic formula.  Christopher Kelk (Mayor Tyson) and Carol McLennan (Margaret) show a real flair for commedia dell'arte. The characters are never played to be one-sided, however.  The competitive brothers, played by Ryan Armstrong and Paul Cotton, are brash and shouty, but have their own development and come to realizations about themselves that supporting characters often don’t get to have. Tappercoom, the Justice, (Rob Candy), may be willing to lock innocent people in dungeons, but he also turns a blind eye to the law when it counts. Even the secondary—but endearing—lovers, played by Chris Whidden and Elsbeth McCall, do more than simply pine after one another, and end up resolving one of the main problems of the play by introducing the drunkenly pious Skipps, (Ian Orr), who brought down the house.

The play itself, for all its sparkling wit and poetic flourishes, is underpinned by some very dark elements. This may be a romantic comedy, but the problems of the play are not confined to misunderstandings about love letters and such. The Lady’s Not for Burning explores attitudes toward death and life, mob violence, and the fear of the ‘other’. As each role plays on its stock character, the play itself, within a classic comic formula, explores darker elements of the human condition that keep it from becoming a bit of old-fashioned fluff. Performed by such a strong cast in the intimate Alumnae Theatre, it is well worth seeing.

Email ThisBlogThis!Share to TwitterShare to FacebookShare to Pinterest
Labels: alumnae theatre, lucy wells, the lady's not for burning, theatre, toronto