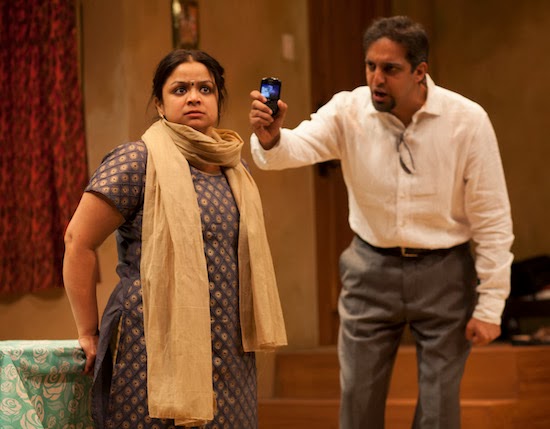 Normally when I review a show I take a lot of notes. I probably take too many notes and drive whoever’s sitting beside me crazy. But not last night. After the first two minutes of Free Outgoing, I closed my trusty notebook knowing full well I would not forget what I was about to witness.

Free Outgoing is about a young 15-year-old girl named Deepa who, out of love and foolishness, becomes the focus of a nationwide scandal when a video of her and her boyfriend having sex goes viral. But the real story is about Deepa’s widowed mother and brother, Malini (Anusree Roy) and Sharan (Andrew Laurie), and what they must do to navigate the scandal in their conservative Tamil community in Chennai, India.


Saying that Malini, played by powerhouse Anusree Roy, has a lot to deal with is the understatement of the century. Not only is she struggling to get by and put her children through private school on a single salary, she now has to stave off attention from her daughter’s infamous video and attempt to salvage some form of reputation for her family. Oh and both her children are expelled from school because of the video, there’s an angry mob outside her door, and she has no one to turn to. See? Understatement. Roy’s performance is mesmerizing from beginning to end. She is strength, violence, fear, truth, charm, and vulnerability all in one. Roy plays Malini’s fight for survival with just the right amount of confidence and desperation but never over the top. She’s a proud woman and you feel her devastation and utter astonishment when she finds out what her daughter has done.

Interestingly, we never see Deepa, nor do we get to hear, specifically, what Malini or her son Sharan, played by the talented Andrew Lawrie, actually think about Deepa’s actions. Roy and Lawrie have great chemistry, a mother and son colliding, each changing their stance from defence to persecution and vice-versa depending on how it affects them in that moment. Lawrie does well with the evolution from young angst-ridden teenager to protective adult. The supporting cast is also great, peppering the show with moments of humour and adding to the drama. Particularly Ramesh, (Sanjay Talwar), Malina’s bumbling colleague from the office.

Director Kelly Thornton has used every crevice of space on the stage and creates the perfect balance between edgy stillness and flares of ferocious outbursts that send you reeling. And a fantastic job by Anna Treusch at creating a set that reflects just who these people are and the life they live.

Finally, I want to take my hat off to playwright Anupama Chandrasekhar for writing something so fraught with complexities and ambiguities but not telling the audience what to think about it. We live in a weird, weird world, to put it poetically. Lives are ruined with the click of a button. Cyber bullying, news stories, suicides, and after all that, what happens? The world moves on, we forget. Because those people on the television or newsfeed? We don’t know them. They don’t affect us. They’re just a story. Chandrasekhar admirably challenges this mentality by humanizing the situation and the people in these stories by showing us what they have to endure. She flawlessly translates a culture and mindset with empathetic and real characters.

And though the play begs the question 'who is to blame for the act?' I think the bigger question is, how do we change the reaction?