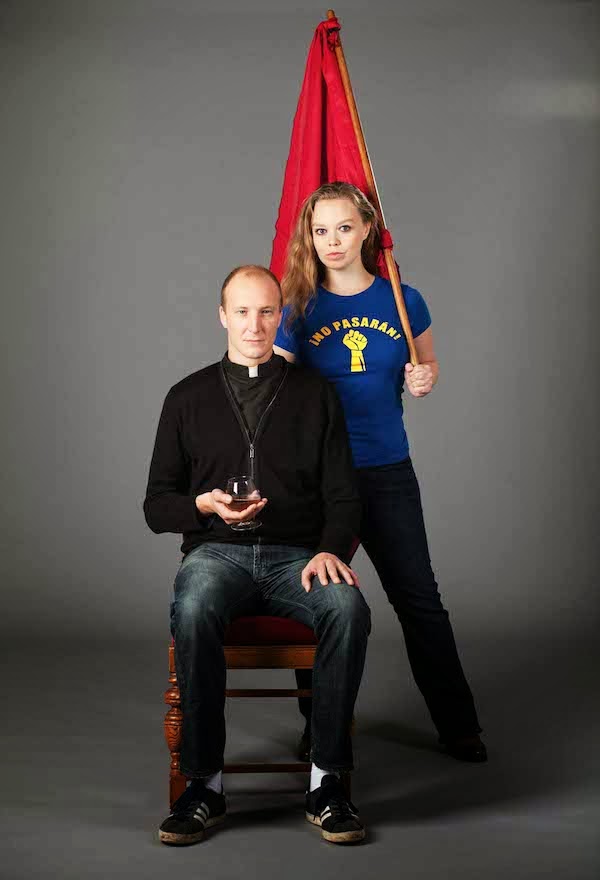 On to war!
Rifles explodes with emotion
by Jason Booker
Once upon a time, Rifles was a piece of propaganda, likely a bit inflammatory, highly theatrical and rousing. But in those days, the play was called Senora Carrar’s Rifles, written by Bertolt Brecht, about the Spanish Civil War. This adaptation by recent Governor General Award winner, Nicholas Billon, changes the title and allows the piece to become more quaint and relaxed, though fraught with tension.


The star of the show (as the original title might imply) is this production’s Senora Carrar, the ever-reliable Kate Hennig. Clean-faced and expressive, she underplays everything, finding subtlety in the everyday gestures of kneading bread or repairing a fishing-net. Hennig carries this piece on her capable back with ease, onstage for nearly the entire piece and always holding the audience’s focus. She gamely watches her visiting brother play cards with her youngest son but Senora Carrar always has an opinion and will fight for what she believes: that no one should go into war, that violence cannot be ended with weapons. Until the day comes when she cannot fight the Resistance forces  that come knocking at her door for her sons or her dead husband’s hidden bounty of rifles.
Under the direction of Michael Wheeler, Rifles plays briskly and efficiently, even as it parades on, in succession, two-thirds of the nine-person cast as guests to Senora Carrar’s home, including an injured soldier, a mourning neighbour (movingly played by Barbara Gordon) and a local clergyman portrayed by the intimidatingly friendly Hume Baugh. Some of the visitations seem a bit forced or anticlimactic though many are just the right length to intrigue, fill in some details about the world of this poor fisherman’s and the ongoing war, then move onto the next person. And there is some dramatic debate between characters too, in case it sounds like the play is all talking heads.
The set by Erin Gerofsky effectively creates an abstract and Brechtian world, implying the tiny and crude cabin but always allowing the audience to see through it – the rope suspending the window and the magnets on the window that affix the shutter – to know this is a depiction, not a reality.
Rifles benefits hugely from live foley composed and performed by Beau Andrew Dixon, who drums a military pattern to start and end the show – the play has begun and ceased – but also to effect gunshots, rain and other fascinating bits of underscoring.
Moving, simple, theatrical and effective, Rifles truly is a must-see piece of work by very accomplished and thoughtful artists.
Rifles is at Next Stage to Jan. 19
Posted by THE CHARLEBOIS POST at 6:26 PM