Painted With Fingers
by Estelle Rosen

Trained in clowning and mask work, Nicolas Cantin hovers on the edge of artistic boundaries and genres, cobbling together pieces that he strips to their bare bones in order to present the very core. Like a lab technician very curious about his research subject, he captures life in all its simplicity, dissecting it by stretching out time to the very edge of ennui. In each piece he zeroes in on intimacy, on what is most secret. Whether it charms or repels, his discourse hits home. With the somber and radical Mygale (FTA, 2012), he ventured into the troubled zones of emotional handicap previously staged in Belle manière and Grand singe. With a trilogy collectively entitled Trois romances, this French artist has made his mark in Montreal. In 2005 he established his dance reputation with Jachère, a solo by Christiane Bourget that led to a Paula Citron Dance Award in Toronto. He then settled in Montreal where he appeared in Glass House and Falaise, and later danced for Frédérick Gravel (Tout se pète la gueule, chérie, FTA, 2010). Co- choreographer of the circus solo Patinoire, presented by 7 doigts de la main, Nicolas also teaches at Montreal’s National Circus School and at the National Theatre School of Canada. He is the sound designer for each of his works, and is currently artist in residence at L'L (Brussels), at Montevideo (Marseille) and at Usine C in Montreal where last year with CHEESE he began his work on memory, further developed in Klumzy.

CHARPO: It seems like you've gone a step further from your training in clowning and mask work. What is the process from Cheese (which began your work on memory) to Klumzy, and is it a natural evolution from your earlier works where you basically stripped pieces to the bare bones to present the core; to get to the root of intimacy. (cont'd) 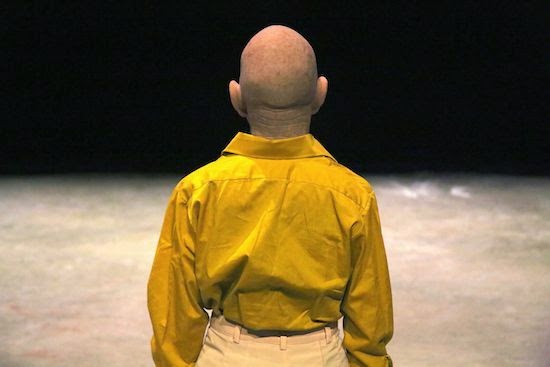 CANTIN: Klumzy deepens my obsessions about the issue of intimacy questions. Like CHEESE, this show takes the form of a portrait, but a portrait that would be awkward. I see Klumzy as a naive painting, sometimes brutal, that would have been painted with fingers. The main idea for this project is to work on the mirror effect knowing that portraying someone else is a little bit like doing his own. I see this show as a punk poem, that will describe  intimate life through childhood, all this between sweetness and savagery.