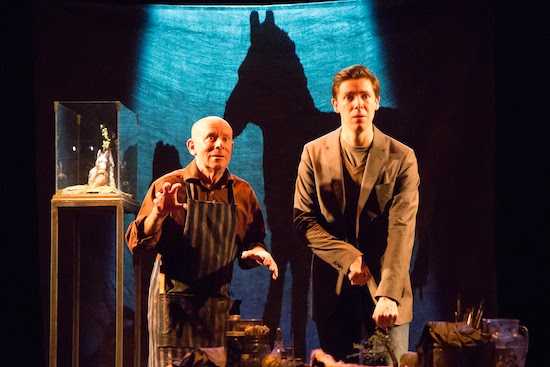 A Story of History
by Jessica Chen

Beatrice and Virgil is an imagistic journey that shifts between the worlds of two Henry's. One, a young Author; the other, an old Taxidermist. In the Author's world, we are in a familiar reality; in the Taxidermist's world, we are led down a dark and winding path into the realm of his imagination. To best enjoy this piece, one should let oneself be led without too much resistance. Beatrice and Virgil is not an easy piece of theatre to watch. I mean that in the best way. In form and content, it is not a linear story. Not a lot 'happens', but that's not the point. The play begins like a sketch of something -- we see the simply drawn outlines of figures, without much meaning or substance; but as the play develops, rich colours seep in and the figures become more fleshed out; until finally we are witnessing living breathing creatures. Yann Martel's language shines in this adaptation; you don't need to read the book beforehand, but you might have the desire to read it afterwards. If you aren't in a rush and are willing to let yourself fall into these worlds, this play has the power to leave impressions on your heart and lingering vibrations in your body.


Our protagonist is the Author simply known to us as Henry. He has written only a few books, but his greatest success was his second – an allegorical tale involving animals. Since the rejection of his latest book, he's lost his confidence in writing and has taken up interest in other hobbies. One day he receives a mysterious letter from another man named Henry, asking for help with his play that he is writing. The Author allows himself to follow his curiosity and is led to a taxidermy shop, straight out of a bygone era. The Author is simultaneously intrigued and frightened by the old Taxidermist, who says he has been writing this play his entire life. His characters are: Beatrice, a softspoken Donkey; and Virgil a spirited Howler Monkey. The Author is quickly drawn into reading the part of Beatrice, while the Taxidermist reads the stage directions and the part of Virgil. At first, the Author and the audience are unsure of what Beatrice and Virgil are meant to symbolize. The Author asks the Taxidermist many questions which the audience is also wondering. Threads are dropped along the way, giving clues as to the history of this strange man. As the symbolism starts to take on greater clarity, danger seems to be drawing closer.

Amy Keith's set physically manifests the journey the Author takes, as he finds himself deeper and deeper inside the other man's mind. In alignment with the story, a layer is removed with each step that the Author takes in discovering the Taxidermist's secret. Projections are sometimes used, to varying degrees of efficacy. With so many design elements, there were times when the stage felt cluttered and seemed to weigh down the simplicity of the text and performances. The shifting between reality and the play-within-a-play is achieved through simple physicality, voice and technical elements. The actors transform easily and I found myself looking forward to these excerpts, which are weaved into the play. While the lighting shifts are effective in distinguishing the two worlds, I sometimes found the excessive use of sound effect on the actors' voices to be distracting.

It is always a treat watching Damien Atkins on stage. His Henry is thoughtful and his Beatrice is both vulnerable and heartbreaking. Pierre Brault's performance as the Taxidermist keeps us guessing; one moment he has our trust and sympathy; the next, he has our hairs standing up on end in fear of what he might do. Both actors expertly handle the heightened text with precision and ease.

This play is a testament to the power of art as a means of understanding and interpreting history. For survivors of unspeakable horrors, how do they find the words to remember? Is it better to remember or to forget? Within the play, there are several moments of silence; in that silence we are asked, How do we go on? Yann Martel is creating a dialogue in which we can reflect on the responsibility that comes with being a witness to history. How we choose to interpret memory will affect where we as human beings go next. Knowing history is not enough, but through art we may come to understand it.

April 12 - May 11
Read also: a first-person piece by director Sarah Garton Stanley
Posted by THE CHARLEBOIS POST at 5:30 PM