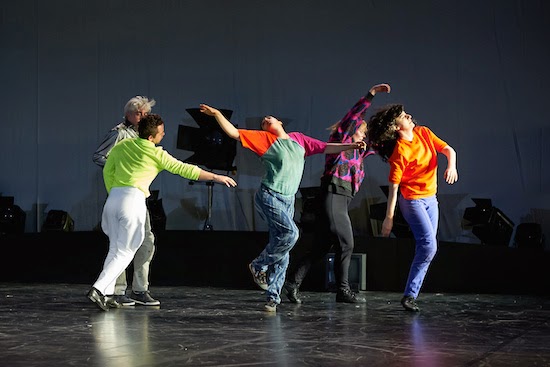 There is a moment with most shows where you feel, thank you, that was great and you wish it would just end there. Some shows it’s because of the ‘false ending’, a tease of the creators to make it seem like the piece is ending but really there is more. Sometimes, like with Built to Last the piece contains so many ideas that you’re not sure where it begins and ends. There is of course the obvious lights up and down, but with this piece from Meg Stuart and Damaged Goods, it was difficult to gauge where it all begins and ends.

There is a lightness in the piece, a comedic tone that is constantly revisited and is both a fun focal point but also tires easily too. With classical music being the backbone of the entire piece and the first time the company has explored using only historical music,  the music seems to dominate the piece in many ways, both commanding the performers to react to its many shifts and moods but also leaving a void in its absence. There is an attempt in this work that is very addictive, failures that endeared me to the work and made me discover a unique quality with each performer. It is in fact this uniqueness that I wanted more, to continue to see the community of the company come together and fall apart in more ways. There are moments of rest, but they seem so planned that the natural doesn’t seem to have place to grow.
There are many aspects to this piece such as revisiting historic dance pieces, dealing with a giant wooden dinosaur, costume changes, exhaustion, subtle attempts at unison that are fun and interesting but don’t always seem to add up to a whole. At two hours in length I found myself exhausted at the amount of ideas included and lack of editing in the creation. After the half-way point I wasn’t sure what exactly the point was, an overwhelmed feeling that was compounded by knowing there was an hour left.
Still the piece had a self-awareness that was refreshing and exciting too, at 27 minutes to go a performer announces the amount of time left and again things shift. With an end in sight, the various aspects of the performance seem to come together and focus. A giant hanging planetary system kicks back into gear and so do the performers giving whatever they have left after an impressive display. There is tenderness is the end that is missing from the rest of the piece, a humanitarian display that speaks to the community that was attempted throughout. A giant amount of white balls fall to the floor at the end, ten are picked up by the five performers, the rest abandoned, the balls like the audience wondering where do we go next?