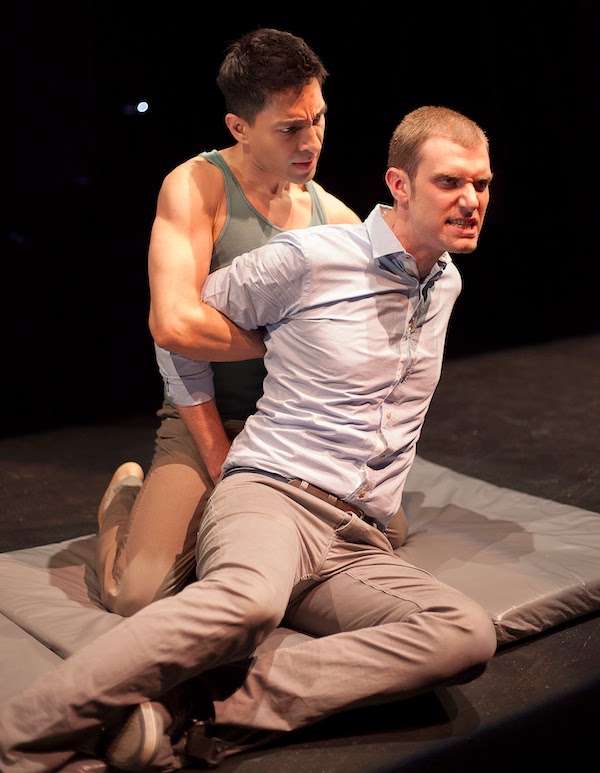 At one point in Sky Gilbert’s latest, Hackerlove, a character comments about how government regulation of the internet proves that the interweb’s purpose has changed. Instead of being about the free-flow sharing of information that it once was, the World Wide Web has been taken over by e-commerce. While some legalities need to be enforced – like unauthorized use of a person’s work or the plotting of a real-life crime – does society need to regulate permissible web-content, including contentious subjects like secretive and graphic depictions of war, bestiality (as suggested in Gilbert’s dialogue) or child pornography? Or do we permit the modus operandi of our interconnectivity to shift?
Shifting: that’s what Gilbert’s play does best. It fantasizes a relationship between Bradley Manning, famous for leaking numerous classified American military documents in 2010, and Adrian Lamo, the man who reported him to officials.


Add to this the element of a Queer theatre company and the Queer writer and director Sky Gilbert. The day after being sentenced, Manning revealed her new name, Chelsea, and that she desired hormone-replacement therapy. Meanwhile, Gilbert uncovers Lamo’s bisexuality and plays with a possible connection between the two characters, whether friendly, sexual or antagonistic.
Structured as a constantly shifting series of vignettes, each moment is prefaced by a Dickensian title stating the prompt for the upcoming dialogue. This technique shatters any hope of a narrative or character arc as the possible scenarios between the two are explored, including the questionable opening scene featuring Lamo’s wraithlike appearance in Manning’s jail cell. Sometimes the scenes captivate, as with Keith Cole’s well-choreographed but gratuitous sex scene or the double-entendres of “Some Computer Nonsense”. Yet scenes often present as detached and undramatic too, especially when simulating online chats through dialogue projected onto the walls of the cell. Overall, Hackerlove engages more with the ideas of these people and their situation than their emotions, which makes it hard to for an audience to empathize with either. However that may be the point too.
Towards the end of the show, Gilbert has the characters righteously and mockingly assert that they are personifications of the Snitch and the Victim. Does this make Hackerlove a piece about shifts in mentality, where the content is less important than the ability to speak and enact these ideas? Does the play then become a fantasy allegory for privacy and spying, masculine and feminine roles, computers versus reality? Or is calling it a theatrical allegory just an easy way out of creating humans onstage, in a post-modern age where references to other works are easily made; cleverly, here to the 1931 Garbo double-agent film, Mata Hari. Not so wisely though, the transitional music choices unaccountably range from tinkling piano to the curtain call’s I’m Sexy And I Know It.
Shifting to other contributions to the show, Andy Moro designed a dwarfed forced-perspective jail cell with silky gray walls to facilitate his countless projections, and their reflections on the walls and ceiling of the black-box mainspace. Including the skylight for extra lighting made for a memorable set that more than served its purpose, stainless steel toilet and all.
Finally, the performers: Kawa Ada as Chelsea and Nick Green as Adrian. Intoning her need to be transparent, Ada captured the swishiness of Gilbert’s Chelsea on her search for love and belonging while caught in a world of southern masculinity, hidden identities and technical jargon. Contrasting, Green’s Adrian remains ruthlessly humourless and lacking in compassion. The performance deliberately uses nasal tones and stiff physicality to communicate Adrian’s germophobic nature (reminiscent of Sheldon Cooper) but it rarely delves too deeply into his motivations. Nonetheless, Adrian manages to subtly steal the show as it shifts from being a piece about victimhood to one interrogating the possibly unforgiveable acts of the persecutor.
April 30 - May 11
Posted by THE CHARLEBOIS POST at 5:03 PM